An open-source wargame to gauge “how climate change could affect a future conflict” has been scheduled for the U.S. Navy in a continuation of President Joe Biden’s executive order on sustainability.

The half-day exercise next week will feature staff from Capitol Hill, the Defense Department, the defense industry, think tanks and academia.

The purpose of the June 29 event is “to come together and really think about and experience what it means to operate in a climate-impacted environment,” Berger said.

“We’re going to create the right level of stress in a very responsible way to see that it is hard to make these choices and there [are] unanticipated consequences and there’re costs and impacts and all sorts of intervening circumstances that we need to think about from each other’s perspectives,” she added.

Each military service now has a chief sustainability officer in an effort to follow President Joe Biden’s executive order on sustainability, Berger said. That position is held by each service’s civilian head for energy, installations and environment.

The move follows the Navy’s unveiling of its self-described “climate strategy,” known as Climate Action 2030, aimed at cutting the Department of Navy’s greenhouse gas emissions.

“Climate change is one of the most destabilizing forces of our time, exacerbating other national security concerns and posing serious readiness challenges,” Navy Secretary Carlos Del Toro said in the introduction to the 32-page report. 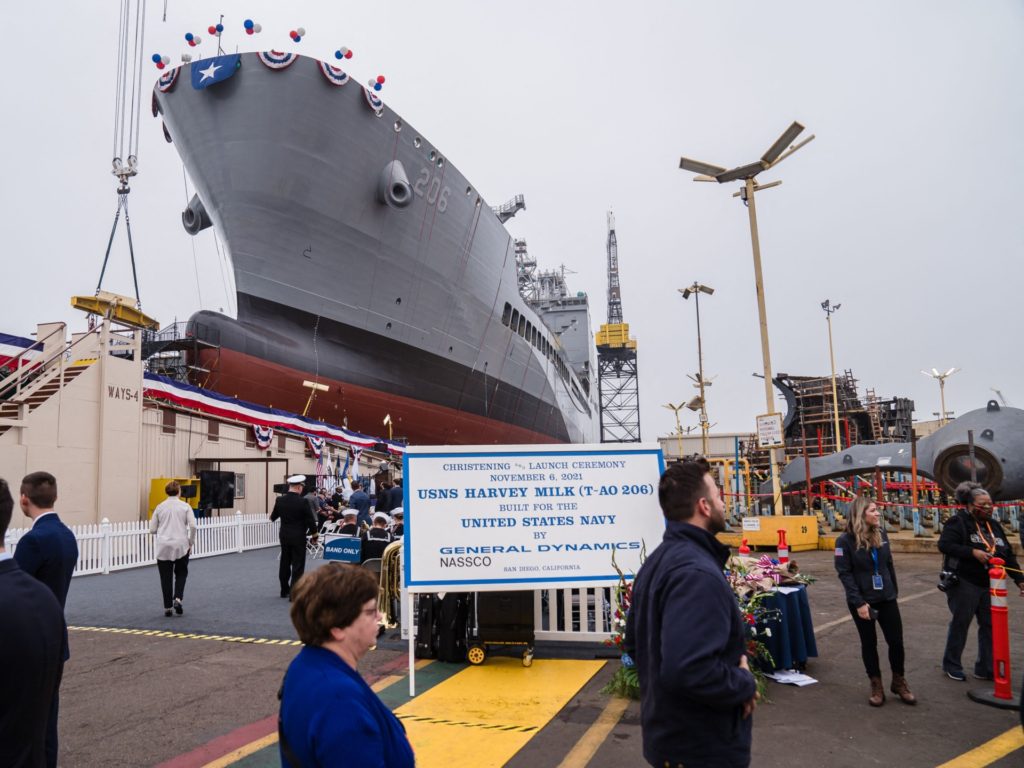 File/Guests walk past the USNS Harvey Milk at General Dynamics NASSCO shipyard during the ceremonial address in San Diego, California on November 6, 2021.  One of the first openly gay politicians in the United States, who was assassinated four decades ago, will have a ship named after him this weekend. (ARIANA DREHSLER/AFP via Getty Images)

“Our naval and amphibious forces are in the crosshairs of the climate crisis and this strategy provides the framework to empower us to meaningfully reduce the threat of climate change.”

Setting the department “on a course to combat climate change” is a main priority of Del Toro’s tenure.

He called the issue “existential” for the Navy and Marine Corps, even as fresh challenges arise across the disputed South China Sea and Indo-Pacific regions.

“If we do not act, as sea levels rise, bases like Norfolk Naval Base and Marine Corps Recruit Depot Parris Island will be severely tested in their ability to support their missions,” he wrote in the report.

“If temperatures continue to rise, the oceans will get warmer, creating more destructive storms requiring our Fleets and Marine Corps forces to increase their operational tempo to respond.”

Climate change responses is not the only new undertaking for the U.S. Navy.

Last week it announced a Navy training video intended to teach sailors to use the “right” pronouns, “show that we’re allies,” and create “a safe space for everybody,” while instructing service members on how to proceed after having “misgendered” someone, as Breitbart News reported.