The United Nations Office of Drugs and Crime (UNODC)’s 2022 World Drug Report, published this week, warned that the growing international movement to legalize marijuana for medical and recreational uses is creating a “significant carbon footprint.”

The report, which addresses cocaine, opioids, amphetamines, and other major drug products in addition to marijuana, suggested that indoor cultivation of cannabis is particularly problematic for the environment because it requires high amounts of electricity, driving up power usage and thus adding to the world’s carbon emissions.

The discovery could complicate the policies of many international left-wing groups who support the legalization of marijuana as a way of ending what they perceive to be unfair police persecution, especially of ethnic and racial minorities, but also consider climate change a global crisis that requires immediate attention.

The UNODC report includes a special section on the environmental impacts of drug cultivation and production in addition to its various sections on individual types of drugs.

“Research shows that legal activities, such as the cultivation of medical cannabis, provide authorities with opportunities for environmental protection, regulation, monitoring and compliance mechanisms,” the report observed. “However, the market for medical cannabis and the expanding cultivation of cannabis in jurisdictions where it has been legalized can also have a significant carbon footprint.”

The report warned that this was the case “especially if those activities result in indoor cultivation with extensive climate control.”

The U.N. allowed that studies on the carbon footprint of a legal marijuana industry were “scarce” and that much of the data available was from American states that had moved to undo restrictions on marijuana sales and use. The few data in question indicate that outdoor growing of marijuana is substantially more ecologically sound than growing it indoors, where the plants often require special heating lamps and other climate control mechanisms to survive.

The studies cited indicated dramatic increases in the carbon footprint – or amount of carbon emissions – of marijuana cultivation when done indoors. One study found, the U.N. observed, that the combined factors of lighting and HVAC amount to 81 percent (between 1,849 and 4,199 kg of CO₂e) of the carbon footprint” of producing marijuana both indoors and outdoors.

“In the case of indoor cultivation, by including CO₂ injections to increase foliage in the estimate, the combined factors can amount to as much as 96 per cent (between 2,192 and 4,977 kg of CO₂e) of the carbon footprint,” the U.N. observed, citing a 2021 study.

Independent of energy consumption, the UNODC expressed concerns about deforestation to make room for more marijuana crops – as well as irrigation to make some lands viable for growing cannabis that otherwise would not be so.

“For outdoor cannabis, the clearing of forests prior to cultivation can be the single largest source of environmental impact,” the agency’s study observed, yet added, “the limited research available suggests that, compared with indoor cultivation, greenhouse cannabis cultivation and outdoor cultivation generate 42 per cent and 96 per cent less CO₂ emissions, respectively,” than indoors activities.

While initially observing that legalized marijuana industries allow governments more power to enforce environmental regulations over cultivators, the UNODC also noted that marijuana growers appear to largely ignore these regulations in places where researchers have studied the development of a legal industry.

“Research has also shown that the cultivation of cannabis in jurisdictions where it has been legalized, does not necessarily ensure compliance with environmental regulations,” the World Drug Report concluded. “A study conducted in California in 2018 found high rates of noncompliance with the cannabis cultivation regulations, suggesting that not all cannabis cultivation sites in jurisdictions where cannabis has been legalized fully apply environmental protection measures.” 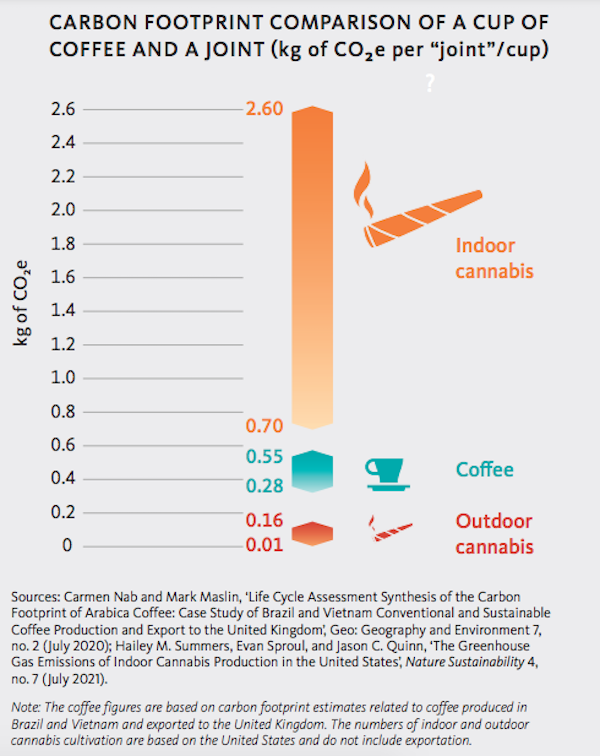 Comparison of the environmental impact of one joint of marijuana to a cup of coffee. Source: UNODC 2022 World Drug Report.

The UNODC observed some factors in marijuana use and production that made it somewhat less problematic environmentally than drugs like cocaine or poppy products. The production of synthetic drugs often results in chemical waste that substantially damages the environment. In addition, drugs like cocaine, for example, are largely produced in only one region of the planet (in the case of cocaine, South America), meaning global demand prompts the need for global shipping, which consumes energy.

The UNODC found record-high rates of cocaine production during the timeframe that the World Health Report covered in 2020, over 60 percent of it occurring in one country alone: Colombia.

Ghada Waly, executive director of the UNODC, warned in her opening message in the report that all “drug use for non-medical purposes is harmful,” apparently expressing opposition to the growing movement in the West to legalize some recreational drug use, as with marijuana.

“UNODC research has shown that perceptions of cannabis harms have decreased in areas where the drug has been legalized,” Waly wrote. “At the same time, the proportion of people with psychiatric disorders and suicides associated with regular cannabis use has increased, together with the number of hospitalizations. Some 40 per cent of countries reported cannabis as the drug related to the greatest number of drug use disorders.”