The United Nations Office on Drugs and Crime (UNODC) published a report on Monday finding “record-high” cocaine production around the world in 2020 even as one of the world’s biggest producers, Colombia, decreased the amount of its land cultivating coca.

The alarming increase in production and use of cocaine globally is especially alarming given that Colombia, the world’s biggest cultivator of coca bush, elected a leftist ex-guerrilla member president. President-elect Gustavo Petro will be the country’s first leftist president and has promised to end Colombia’s war on drugs with programs such as replacing coca cultivation with marijuana and refusing to use chemical fertilizers to attack illegal coca growth.

Colombia’s Marxists, specifically narco-terrorists such as the Revolutionary Armed Forces of Colombia (FARC), have used the cocaine trade to fund terrorist activities for decades. The FARC’s success in getting the government of former President Juan Manuel Santos to agree to a “peace deal” that granted its members uncontested seats in Congress and the possibility of amnesty for “political” crimes in 2016 resulted in Colombia’s biggest-ever cocaine yields a year later.

The UNODC 2022 World Drug Report – an extensive look at global trends in the use and production of multiple illicit drugs also including amphetamines, opioids, and cannabis – was published this week but covers 2020. It revealed Colombia to be overwhelmingly the world’s largest cultivator of coca bush, accounting for 61 percent of the world’s production.

“The global area under coca bush cultivation remained basically unchanged in 2020, at 234,200 ha [hectares], 5 percent below the peak in 2018,” the report documented. However, “potential cocaine manufacture grew 11 per cent in 2020, compared with the previous year, reaching a new record high of 1,982 tons (adjusted to 100 per cent purity).”

“Manufacture increased by 8 per cent in Colombia and by a combined total of 16.5 per cent in Peru and the Plurinational State of Bolivia. Global cocaine manufacture has now more than doubled since the low of 2014,” the report observed.

The report found that Colombia had decreased the amount of land used to cultivate coca, but the “hotspots” still growing the drug “now produce more leaves, more alkaloid and more cocaine per hectare.”

“The area under coca bush cultivation in Colombia more than tripled during peace negotiations with FARC-EP, then decreased after the peace agreement was concluded in November 2016,” the report found. “In 2020, despite productive areas under coca bush cultivation decreasing by 9 percent, compared with the previous year, potential cocaine manufacture in Colombia rose by 8 per cent, to 1,228 tons, owing to increased yields and higher laboratory efficiency rates.”

Santos had been president of Colombia for four years in 2014 and enjoyed the aftereffects of policies implemented under predecessor Álvaro Uribe. During the eight years he was in power, from 2002 to 2010, Uribe partnered with the American government to use counter-terrorism tactics similar to those used in Afghanistan against al-Qaeda and the Taliban to target FARC leaders. 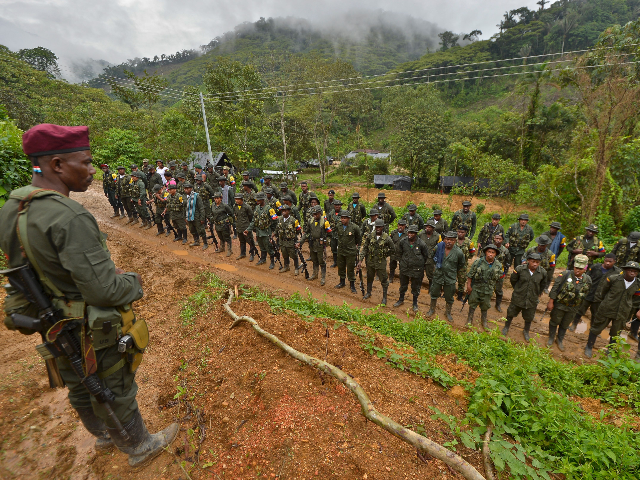 “The 50-year-old Revolutionary Armed Forces of Colombia (FARC), once considered the best-funded insurgency in the world, is at its smallest and most vulnerable state in decades,” the Washington Post reported in 2013, “due in part to a CIA covert action program that has helped Colombian forces kill at least two dozen rebel leaders, according to interviews with more than 30 former and current U.S. and Colombian officials.”

Organized crime experts believe that senior members of the Maduro regime are intimately involved in transnational cocaine trade. United Socialist Party of Venezuela (PSUV) leader and television host Diosdado Cabello has been repeatedly identified as the head of the Cartel de los Soles, one of the largest cocaine trafficking outfits in the hemisphere.

Two of Maduro’s nephews were sentenced to 18 years in prison in 2018 for attempting to traffic 1,700 pounds of cocaine, believed to belong to the FARC, into the United States.

“We support the government of life and hope that is being born as a new dawn, willing to return peace and dignity to us, to defend the world from climate change with the shield of the Amazon rainforest,” the terrorist group declared. “Let us all without fear join the first line of struggle for social justice.”

Petro has repeatedly downplayed the threat of cocaine use in public, describing sugar as “a much more harmful drug” than cocaine or marijuana and similarly describing fossil fuels as more dangerous that the stimulant. Petro has actively rejected the use of glyphosate herbicide to kill cocaine crops, dismissing the practice as “just an imposition of the U.S. captured in its agendas due to commercial interests.”

“To do away with coca leaf cultivation we need agreements with agricultural communities and agrarian reform,” Petro asserted in 2019.

Petro has also opposed the extradition of cocaine criminals to the United States and recently reached out to Maduro in Venezuela seeking closer ties despite Diosdado Cabello, the alleged head of the Cartel de los Soles, threatening a Ukraine-style invasion of Colombia after Russia launched its attack in February.