A writer for the Huffington Post has admitted vandalising a UKIP poster in Birmingham. In an article published today, Bill Drummond, who describes himself as an artist, proudly posted photos of himself defacing the poster and justified his actions by comparing the UKIP billboard to Nazi propaganda.

In the article, Mr Drummond said that he was looking for a large billboard to deface when he chanced upon the UKIP poster, which he says “offended me in so many ways.” The poster in question features an out-of-work labourer on a street, with the tagline “EU policy at work. British workers are hit hard by unlimited cheap labour.” 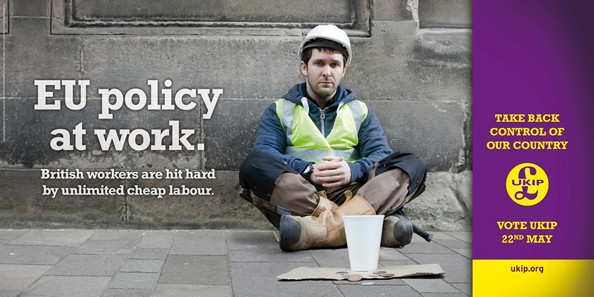 Drummond explains that he thought the poster was “very cynically trying to pander to us at our most vulnerable and negative and not to our better selves,” comparing it to Nazi propaganda:

“I may be in danger of over stating it, but this would have been exactly the same appeal the National Socialist German Workers’ Party would have had in Germany in the years after the First World War when the German people were feeling at their most beaten and vulnerable.”

“This billboard not only offended me morally and aesthetically it also went against everything that I feel political discourse should be about.

“Thus there was nothing for it, after my train pulled into Moor Street, I picked up my last remaining tins of Drummond’s International Grey and got to work.”

He explains that the word “Grey” is his graffiti tag. Ten years ago, he created his own band of paint, Drummond’s International Grey, for the sole purpose of vandalism. He says that people who bought it could use it to paint over “anything you found to be morally or aesthetically offensive.”

He admits: “Basically I was in the business of promoting vandalism.”

Mr Drummond’s vandalism is the latest in a spate of attacks on UKIP posters across the country in the run up to the European Elections.

Yesterday, two UKIP posters in the London borough of Haringey was defaced by far-left activists who painted a Hitler moustache on Nigel Farage and daubed the posters with slogans such as “Racists”, “UKKKIP”, “no fascists no racists” and “blame the bosses not the workers”. 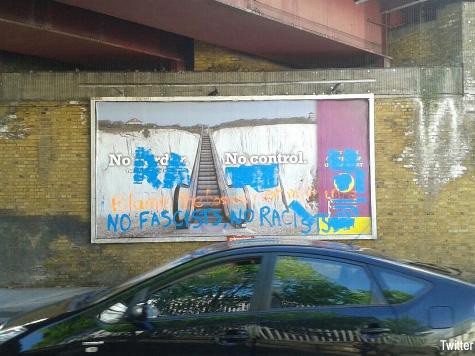 Gawain Towler, a UKIP candidate in the European Elections for South West England, told Breitbart London: “Political graffiti is, and has always been the weapon of the ineffectual, and so it is again. Without argument they attempt slur, and end up with self satire.”