Ben Kuchera, opinion editor at games website Polygon, publicised lurid sexual allegations about the chief executive of Stardock, a 20-year video games industry veteran, in an apparent attempt to do professional damage to someone he perceived to have right-wing politics, two industry sources have told Breitbart London.

While in his previous job at the Penny Arcade Report, Kuchera, pictured above, who has also worked for Ars Technica, made no effort to validate shocking allegations made against Brad Wardell, founder and CEO of Stardock, which makes video games, PC utilities and other software products. He reblogged details of a harassment claim made against Wardell that were so sexually graphic they set the internet on fire.

A harassment case made against Wardell in 2010 was dismissed with prejudice in September 2013, meaning it cannot be brought again. The claimant, Alexandra Miseta, wrote a public letter of apology for her groundless lawsuit, pursuant to the terms of the dismissal.

The case was reported by Kotaku under the byline of feminist activist reporter Kate Cox. Cox’s story was posted with less than a day’s notice given for comment – only an hour of that within normal business hours. Tech blogs often give unrealistically short periods to supply comment, usually on stories of meagre significance, to give the illusion of thoroughness.

But such serious allegations ought to have given editors pause for thought.

In reposting Cox’s story, three hours after publication, Kuchera publicised a complaint that detailed horrendously graphic accusations, without contacting Wardell for comment and without including similar detail from Wardell’s counter-suit.

He also gave the piece the headline “Stardock CEO Brad Wardell sued for sexual harassment, with some pretty damning evidence.” As any cub reporter will know, allegations in a lawsuit are not evidence of anything: they are merely allegations.

Visible in the archive.org version of the story is the claim that Wardell asked Miseta if she “enjoyed tasting semen.” Wardell was not contacted before these salacious claims were published. The headline was later changed, and the entire piece is now offline. 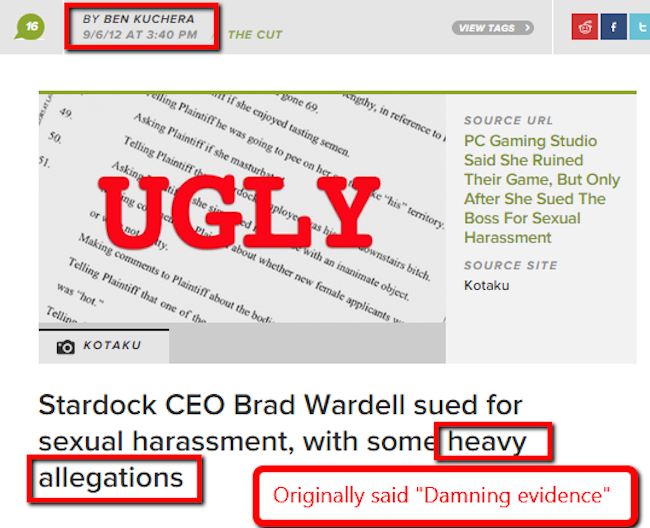 According to Wardell, death threats were forthcoming after Kuchera’s actions because his reblogging caused Kotaku’s article to leap to the top of search engine rankings.

Regular readers will be struck by the irony of Kuchera’s responsibility for this mess: Kuchera was seen in private emails leaked to Breitbart London last week demanding that The Escapist, a rival website, take down forum posts that discussed sexual allegations about Zoe Quinn, a developer whose colourful private life has been the subject of widespread reporting in recent weeks.

He seems to have had no similar complaints about the forum posts he triggered about Wardell, some of which remain online. Kuchera stands accused of hypocrisy and double standards when it comes to reporting sexual claims about men versus women.

Quinn herself complained when Stardock acquired the rights to Star Control, saying the game had gone to “bad people.” Wardell told Breitbart London his son was bullied at school and directions to his house were posted on the internet, including Google Maps images.

“I received an email from someone who described my house in sufficient detail to concern me and promised to kill me, rape my wife and sodomize my son,” Wardell told Breitbart on Monday. “My Wikipedia page was defaced with people putting up that my sons were ‘gay.’ People today still refer to the allegations in themselves as proof.

“Every time we’re working with a new business partner who does due diligence, this issue comes back up – this happens 2 or 3 times per month – because a Kotaku article about the torrid drama still shows up on the front page of Google results on me.”

Contacted by Breitbart London on 20 September, Ben Kuchera has since failed to respond to questions about his reporting practices. He has also declined to comment on whether his needling of Wardell occurred because Wardell is known to have conservative opinions, in an industry where liberal bloggers and Left-wing ideology is the norm.

Kuchera has a controversial reputation in the video game industry himself. Readers regard his far-Left political leanings to be distracting and he is well known for getting into regular arguments on social networking sites with other reporters and with ordinary gamers.

He is accused of abruptly terminating arrangements for an interview with transgender gamer and developer Devi Ever, who says that Kuchera was anxious to talk to him until he discovered that she supported the #GamerGate movement, which has for the last month been fighting for greater transparency and ethics in game journalism.