Being transsexual is a bit like being gluten intolerant: for every real one, there are fifteen or twenty just trying it on for attention. Sorry if that sounds rude. We don’t mean to disparage those suffering from transgenderism; rather, to finger the epidemic of imitation identity disorders and theatrical attention-seeking currently infesting social networks such as Tumblr, making a mockery of genuine sufferers.

Greed, selfishness, too much spare time and access to the internet can have a curious effect on some people. And when you throw in the modern tendency toward whining entitlement and the perpetual broadcast of every thought, feeling and inclination, something truly weird emerges: people who demand to be regarded and treated as things they are self-evidently not, such as white girls advertising to the world that they are “mentally black” and tortured musicians who advertise their “true” Romany identity despite having no gypsy blood in their veins whatsoever.

It gets even more crazy, as we’ll see. To understand this bizarre world of people who believe they are trans-species or trans-ethnic or trans-cultural, it is best to start with the marginally less weird world of “furries.” Furries are people who have created a “fursona”, a sort of animal character to which they relate and which in many cases they leverage as part of their sexual identity, normally to overcome self-doubt or self-confidence issues.

Fursonas manifest themselves as parodies of furry animals–often cats and dogs–which are then heavily sexualised, albeit in cartoonish fashion. For lonely people stuck in front of their laptops, fursonas become a sort of crutch for social interaction.

Unsurprisingly, the line between fiction and reality can easily become blurred: the longer furries spend with their character, the more likely they are to mistake themselves for a wolf with oversized genitals. This can become particularly apparent when another person insults their fursona; furries become very protective of their alter egos.

The following video, which is not appropriate for consumption at work, shows what happens when the desire to perform on the internet collides with deep psychosexual dysfunction and, in this case, comic book fetishes. (The comorbidity of confused sexual identities, shaped by internet culture, and pathological narcissism go hand in hand.)

Don’t underestimate what a huge trend these disturbing alternative lifestyles represent: although, of course, there is little data on the number of people who identify as animals or whose sexuality is dependent on animal personas, the levels of activity across the many furry forums online suggest that there are tens of thousands of furries worldwide.

Yet furries are merely a stepping stone between normal people and online cultures where people reject their real identity entirely, because they say there is a mismatch between their mental identity and their physical bodies. The largest of these subcultures, after trangenderism itself, is known as “otherkin.” 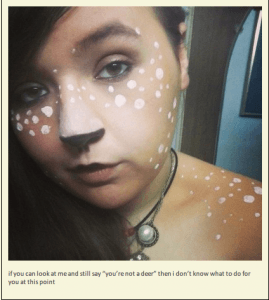 Like furries, otherkin often create online avatars which they hide behind, but instead of keeping their real selves separate from psychosocial or sexual imaginings, they seem to believe that the character they have created is a truer reflection of who they “really are.”

Some otherkins believe they are literally not human, while others believe that only their soul is non-human and that they are trapped in the wrong body. It can sometimes look like an unintentionally funny free-for-all. But whether you think you are a reincarnation of a Cherokee man-beast, you think you come from a long line of otherkin field mice or you think your soul flew in from a parallel universe (we do not jest), anything is permissible in the ego-centric world of otherkin.

It is enough, in this community, merely to assert your “true” identity; then, the social effects of the internet take over, and you are provided with psychological enablers at terrifying scale in the form of supporters, fellow travellers and generally sympathetic parties who will encourage you to “become who you really are.”

And otherkin can sometimes believe they are very strange things indeed. Dragons, werewolves, angels, demons, elves, cartoon characters… it’s amazing what alienation from mainstream society can do to the imagination. While this may all sound entertaining, there is a darker side, with otherkin reporting extreme difficulty relating to other human beings in conventional sexual situations.

Iron sharpens iron: kin meet in closed online worlds where they can indulge in their fantasies together. And when people who believe they are the reincarnation of a medieval tree nymph or merely a wolf find themselves with an indulgent audience, they struggle to escape from the rabbit-hole. They start citing various feelings, allergies, hallucinations and psychic abilities as “proof” of their wild claims.

While otherkin are sometimes reluctant to describe their lifestyle choices away from their laptops, it’s not hard to see a pattern in the type of people drawn to the subculture. They are invariably depressed, confused about their sexuality, socially marginalised and easily offended–which suggests that the number of Millennials who indulge in these habits is probably gigantic.

The aetiology of otherkin is the subject of debate. But it is a sufficiently established subculture for there to be multiple theories about why people end up believing they are cats or cockatiels. Not all of them are as straightforward as, “it’s a cry for attention.”

Dark fantasies of surgery undergone to achieve parity with the perceived real self are regularly exchanged on these boards: in a grotesque parody of transgender surgery, this notorious fake image (not for the faint of heart), purports to show a man grafting elements of a severed dog’s head onto his own body in an attempt to become more canine.

Where otherkin have been successful in commandeering identity politics to their own fantastical ends, others have followed, with new and ever-more complex self-descriptors. Perhaps the most disquieting of these people are those who claim to be trans-ethnic or trans-cultural. 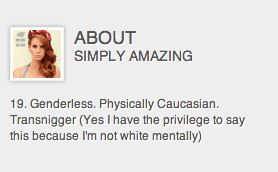 Trans-ethnics believe that they were born into the wrong race. Interestingly, it only seems to be caucasians who suffer from this particular affliction; black teens seem happier as they are. Indeed, caucasians represent an overwhelming proportion of all these trans groups.

But a growing number of young white teens, predominantly girls, are using words such as “transnigger” to describe themselves, to the bafflement and occasional fury of black people. For some time, apocryphal stories and jokes such as the image to the left have been circulated online; but our research has shown that there is now a modest but burgeoning community of sincere transniggers centred on the Tumblr social network.

It never seems to be the literal physical attributes of another race or any perceived advantage of belonging to another ethnicity that drives people to declare that they’re “not white in the head.” Rather, trans-ethnic people seem more consumed with assimilating what they feel to be the oppressed aspects of that race–for example, demanding special privileges because their “authentic” black self.

The tragicomic result, which we have seen played out on Tumblr and Twitter in our research, is white middle-class American girls demanding time off from college examinations to deal with the trauma of black shootings. Sometimes, shockingly, they even invoke slavery, which would appear to be the point at which trans-racialism overtakes species dysphoria as a serious psychiatric problem, at the level of clinical lycanthropy.

Others don’t go to the length of claiming they are of another race to demand the privileges and associations of alternate cultures. They simply claim to be “trans-cultural”–i.e., they look white, they are white, but really feel they ought to have been born as, say, a Romany traveller because of the “deep spiritual connection” they feel with supposed gypsy culture.

Modern online identity for teens who grew up with Tumblr and Twitter is a shopping basket into which they throw identity labels to concoct their own “unique” personality: a bit of black, a bit of genderfluid, a bit of “autism” (Millennials have cottoned on to the fact that they can excuse all manner of personal failings with that one). Not only can lonely individuals mark themselves out as special snowflakes but also invoke their own particular mix of underprivilege to combat criticism and ridicule from others.

Two characteristics of otherkin, transniggers and transromany, though, are, firstly, how much their identities seem to change over time–perhaps to suit their current lines of reasoning or prevailing fashions. Witness the explosion of young people describing themselves as some form of transsexual, or invoking gender fluidity in their social media profiles, since Laverne Cox appeared on the front cover of TIME.

Young people have always imitated the latest thing as a way of drawing attention to themselves, but never before has society been so completely defined by identity politics, and never before has a consumerist wonderland of alternative racial, cultural, sexual–to say nothing of interspecies–identities been readily Googleable.

Young people know that in an era where sentences beginning “Speaking as…” confer valuable social cachet, they had better start acquiring some oppressed characteristics before expressing their opinions in public. (Most of these conditions coincide with extreme forms of narcissism, pathological lying and sociopathic tendencies. Draw from that what you will.)

Our second observations is how often these identities seem to emerge at opportune times, which perhaps suggests that much of this phenomenon is not really mental disorder at all but is merely staged for attention and leveraged as conversational weaponry, further clouding the question of inescapable psychological dysfunction and giving rise to suspicions akin to our opening gibe about gluten intolerance.

For instance, consider the blogger Charles Clymer, who got into trouble recently with feminists for some perceived infraction of the third-wave rule book, and then abruptly came out as “genderfluid”–right when he needed an out from the brewing storm. (You might have thought genderfluid was something that came out just before the baby, but apparently not.)

And then there are the numerous self-described transsexuals whose personal disclosures and “art projects” always seem to be accompanied by requests for money–and, of course, healthy dollops of online drama, played out on social media and in forums, YouTube comment sections and message-boards. Patterns are emerging that are impossible to deny.

It’s also hard to escape the conclusion that there may be a continuum between some sorts of “gender fluidity” and the rapidly expanding racial, cultural and species confusion, deeply entwined with sexuality and self-identification, of young people today. Which begs the absurd but inevitable question: how long before otherkin are demanding operations from the taxpayer to make them look more like wolves?

That might sound like an absurd–even an offensive–thing to ask. But imagine what you’d have said just ten years ago about transsexuals, and fifty years ago about gays, and you quickly realise that, at some point, society is going to have to draw a line. 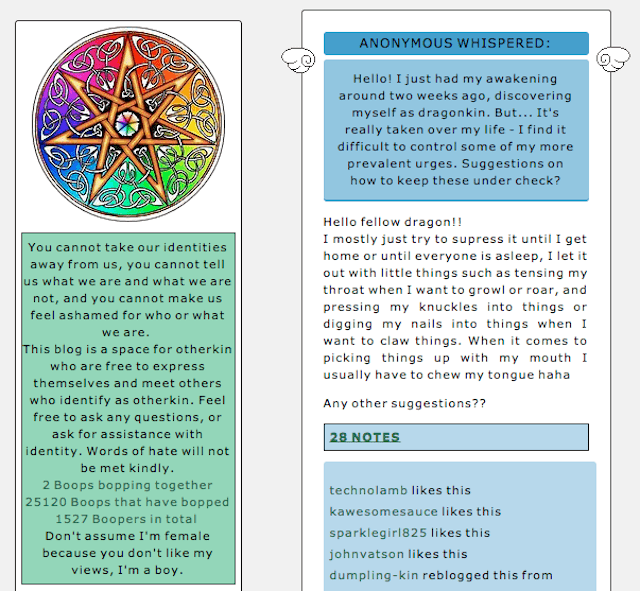