A soldier has followed his conscience to desert his barracks in the UK to travel to the Levant to fight the Islamic State.

The as of yet unnamed 19-year old trooper, who is believed to have met up with other British and Commonwealth fighters who have volunteered to join Kurdish forces, had taken up studying the Arabic language prior to going Absent Without Leave (AWOL).

Although a number of former British and American soldiers have decided to use their skills to do their part to defeat militant Islamism in the Middle East, this may be the first time a serving British soldier has absconded to fight against ISIS. Despite the fact the soldier is fighting the enemies of the Queen, upon his return he may yet face being court-martialled for abandoning his duties, reports Sky News.

His disappearance became known to his family when he wrote to them, having claimed to have already arrived in the war-zone: “I’ve gone to join the Kurds in Syria and Iraq. I’m with other British people and a Canadian at the moment. 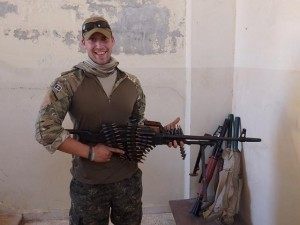 “I don’t know how to explain it to you but I really want and need to do this and I will be safe… I have good skills and I can speak the language I can help these people and help with this fight.

“I’m so sorry to put you through this but I do good, I will get in trouble for being AWOL but it’s minor and no prison sentence.”

Breitbart London reported last year on two British veterans who decided they had to travel to Syria to help defeat the “evil” there. In a statement on their Facebook page, British soldiers and Afghanistan veterans James Hughes and Jamie Read said: “All that is necessary for the triumph of evil is that good men do nothing.

“This is not a religious war nor is it a racial war, this is a war of good against evil – a magnificent simplicity.

“And those that are good will continue to fight regardless of what the media portrays us as and regardless of the media attempts to pervert the beliefs that motivate us, and in the end good will win because there are still enough good men who refuse to do nothing”.