Russia has formalised its deal with Cyprus to use naval bases in the European country for resupply and repairs, as the Cypriot government criticises EU sanctions on Russia and calls itself Putin’s friend in Europe.

While the move which will prove lucrative for Cyprus and likely further cement ties between the nations, it will also increase tension between Russia and NATO as both vie for the affection of the strategically important but broadly politically unaligned island. Although Cyprus is a member of the European Union, it is not a member of the North Atlantic Treaty Organisation (NATO), and has long been a close partner of Russia.

A significant proportion of Cyprus’s annual GDP derives from Russian businesses using it as a tax haven, and during the last economic crisis while aid wasn’t forthcoming from Cyprus’s European allies, Russia extended a significant loan on preferential terms. On the same day Cyprus agreed the naval base terms, the repayments of the loan were again deferred for another five years.

Speaking at a conference about the help Russia had given Cyprus, Putin said: “We think that the Russian Federation has thus made a positive contribution to normalising the situation in the eurozone after the difficult period in 2011-2013,”

The move represents the latest move of a resurgent Russia with an increasing interest in the eastern Mediterranean, especially with stakes in Greece, Cyprus, and Syria. Although Russian warships officially withdrew from the eastern Med at the end of the Cold war, the changing situation in the Eurozone and the ongoing Syrian civil war led to the re-establishment of the Russian Eastern Mediterranean fleet for the first time in 20 years in 2012. 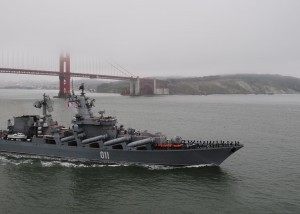 In 2013 Russian admiral Viktor Chirkov said of the build-up, increasing the Mediterranean presence to ten ships: “The task is crystal clear: to avoid a slightest threat to the security of the state.

“This is a general practice of all fleets around the world, to be there when a tension level increases. They are all going to act on operational command plan of the offshore maritime zone… Russia will be building up its Mediterranean fleet until it is deemed sufficient to perform the task set.”

Up until this point the deployment has been made by borrowed ships sent from the Baltic and Black sea fleets which would undertake tours of duty before returning home, however the Cypriot deal could mean a more permanent presence.

This is not the first Russian naval base in the area. A significant naval facility was built in Tartus, Syria by the Soviets in the 1970’s and still remains an official Russian base, and source of support for Assad’s rump government, even if Russian activity has declined there since the civil war. The two Cypriot bases now officially for use by Russia as of Wednesday’s agreement have already been used by visiting Russian warships over the past few years on an ad-hoc basis.

Speaking on the formalisation of this agreement, which has existed in practice for some time, Russian president Vladimir Putin said: “Our friendly ties aren’t aimed against anyone. I don’t think it should cause worries anywhere”. Although warships will be allowed to refuel and repair as necessary, the bases won’t be lent for full military use, as other bases already are to the British.

Speaking in Moscow, Cypriot president Anastasiades said he was working to “achieve common goals for the benefit of all the peoples of both the European Union and the Russian Federation”. Speaking of discussions he’d had with Putin about the Ukraine crisis, Anastasiades remarked he wanted to work to “strengthen relations between Russia and the European Union”, and there had been “general bafflement and general concern” at the reaction to the Ukraine situation.

Anastasiades also said he had discussed combating the Islamic State with Putin. The Russian president confirmed in questions with the press that Russian ships based in Cyprus would be used to combat “terrorism and international piracy”.