Brustholm Ziamani, 19, was found guilty of plotting to behead a British soldier after he was arrested in London last year. He has now been sentenced. 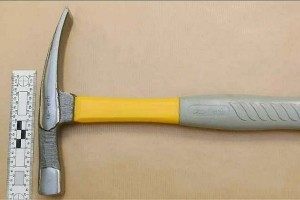 Ziamani’s stonemasons hammer, ordinarily used for breaking rocks but could kill a man with one blow

At the time of his arrest Ziamani, who converted to radical Islam “rapidly” and was inspired by the terror-killing of Fusilier Lee Rigby to commit political murders of his own, was found to be carrying a large knife, a stone-masons hammer and a black flag of Islam. Police were aware of his radicalisation and made the intelligence-led arrest at the last moment before he was to kill.

Ziamani was active in the on-line extremist community, researching army cadet bases and posting hateful comments on Facebook. Before his arrest he wrote: “Sharia Law on its way on our streets we will implement it its part of our religion we will get Dem kufar soon we r soldiers of Allah TAKBIR.”

In another post, speaking of the murder of Lee Rigby, he said: “Why are They acting like Lee Rigby’s death was the worst death ever he just got run over and stabbed left right centre I bet if n Englishmen did it they wont say nuffin or make a big deal over it but two muslim brothers run over dis kaffar n now makin a big deal.”

Ziamani was sentenced at the Old Baily on Friday to a 22 year jail term.