Nazim Mahmood was a 34-year-old British man who killed himself recently because his working-class Muslim parents couldn’t accept that he was gay. But Mahmood represents an increasingly unfashionable way for troubled young gay men to end it all.

It used to be that nice middle-class homosexuals who abruptly decided to kill themselves in melodramatic fashion leapt off balconies, like Mahmood did. But, these days, they’re just as likely to join ISIS.

Consider the evidence. All those butch pics of ululating young men in sleeveless tees with their guns out. (Both sets!) All that hugging and wailing and attention-seeking… well, you get the idea. Is it just me, or is there something a bit cringe and unconvincing about all that desperate, preening masculinity?

When I see groups of young men huddled on hilltops in Syria, all I can think about is gay club meat markets and the changing rooms at Gold’s. Nowhere is this more evident than when they chuck gays off roofs: as we all know, inside every angry homophobe there’s a Liberace screaming to get out.

And what about all that nice tailoring you see in ISIS vids? Only a gay man could have come up with those natty, flowing black uniforms and swooshy logos. (Not to mention the uniquely camp cruelty of comparing your commander to a doner kebab. They say the comparison was dreamt up by anti-ISIS activists but I’m not buying it.) 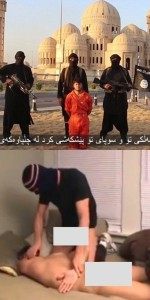 Then there’s the uniquely vicious and theatrical nature of the Islamic State. Would any heterosexual terrorist movement be quite so vindictive, spiteful but at the same time attention-seeking? It’s a unique combination that I’ve often seen over brunch in West Hollywood but never before from global terrorists.

Perhaps that’s why even al Qaeda is horrified by ISIS: they’ve been out-sassed. I mean, how camp is that 17-year-old Australian boy, pictured above, who changed his name Abu Khaled (his family call him “idiot”) and went off to play soldiers with the big strong brown boys? Am I the only one to see parallels with Bagoas, the eunuch of Persian legend? 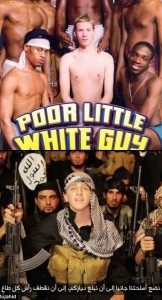 You have to remember that sexuality is a lot more fluid in the Middle East. In Britain and America, people are mostly either straight or gay, but, once you get to the Mediterranean, the “every hole’s a goal” mentality kicks in.

I can tell you as a Greek: whether it’s your neighbour’s wife, your brother or a medium-sized farmyard animal, men are a lot less discriminating about where they put themselves in hotter, poorer countries.

Sure, there’s a fair bit of raping and pillaging as ISIS expands its territory. But something tells me that when the women’s bodies are piled up and there are no camels to be had, the lusty, foul-smelling young bucks of the Islamic State are perfectly happy with each other’s company. 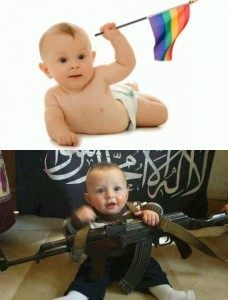