Weeks of protests against a building to be used to shelter refugees coming to Germany from abroad have apparently culminated in it being burnt down, in what local authorities are calling an act of arson.

Remarking that the culprits should be “behind bars”, a government official called the burning on Saturday night a “heinous act”. Although property damage could run to tens of thousands of pounds, no one war harmed in the incident, which is believed to have been started with lighter fluid, reports theLocal.de.

The building in Tröglitz, Sachsen-Anhalt, was due to become the home to 40 asylum seekers next month, and has been the focus of a concerted political campaign by national-socialist political party the NPD. German news reports despite the refuge centre being destroyed, the town will still have 40 refugees forced upon it – with the towns recently retired mayor telling residents to take on the ‘new Europeans’ in their own homes. 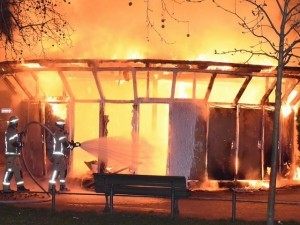 This is only the most recent act of arson against buildings related with mass migration and asylum in recent weeks, as Europe – and Germany in particular – struggles with the great influx of people from all around the world. Breitbart London reported last week on an arson attack against a Berlin art installation which celebrated both the coming of the worlds poor to Europe, and criticised the European Union for not having borders that were open enough – that they should welcome all comers.

The so-called ‘open doors pavilion’, which hosted events and talks by left-wing thinkers and activists, and flew a custom-made black and silver European flag from its roof was destroyed last Tuesday morning by fire.

Last month, Breitbart London also reported on an arson attack against an asylum refuge in Northern Italy. It was not the first time the building had been fire-bombed, as it had been after locals complained about the local young girls being molested by the inmates. Speaking of the unemployed migrants who lived at the centre, one local said after the attack:  “The country is in pieces, why don’t they stop dumping boatloads of migrants here? If you’ve got no work, why come here?”.