A Liberal Democrat activist who sits on two national party committees has been suspended from her regional party after a string of sexist comments on social media. The activist in question, Sarah Noble, made multiple tweets of a disturbingly hateful nature, including “kill all men”, “fuck men”, and “die cis[gendered] scum”.

The comments were brought to light by by HEqual, a gender egalitarian campaigning group. After being made aware of them, former Lib Dem Equalities Minister Jo Swinson was quick to condemn Noble’s comments. Writing on Facebook, Swinson said the comments were “completely unacceptable” and “in no way represent the views of Liberal Democrats”. The former Minister also said that Noble has been asked to delete her tweets and apologise. No apology has yet been forthcoming. 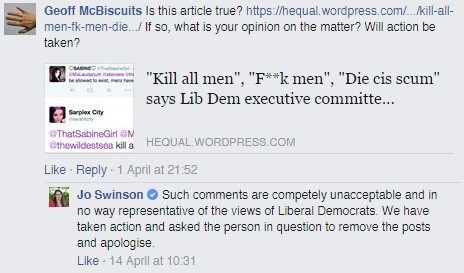 Noble sits on the national committees of the LGBT Liberal Democrats and the Secular & Humanist Liberal Democrats. She has also been elected to the executive committee of the National Union of Students’ LGBT wing, which, like the LGBT Lib Dems, has a zero-tolerance attitude towards hate speech. 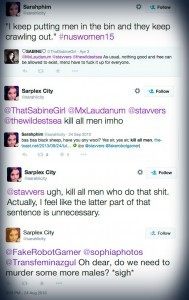 Some of these tweets have been deleted. An archive can be found here.

She is also a former team member of the “Atheism Plus Block Bot”, a twitter program that allows you to block predefined lists of users. The Block Bot’s creators claimed that the program blocks “trolls, abusers, and bigots”, but it faces growing accusations that this is merely a smokescreen for targeting people who offend them, such as the biologist and author Richard Dawkins. In the wake of Noble’s comments, the question of whether the Block Bot is really against all forms of hatred and bigotry is sure to be raised.

The Liberal Democrats are known for the high value they place on due process, and it may be some time before the various committees take action. However, this is unlikely to placate HEqual, who continue to ask why other sections of the party have not followed the example of Jo Swinson and the Yorkshire and Humber Liberal Democrats.

@mensrightsrdt I certainly do not. Any such comments about any sector of society are not liberal.

Writing on their blog, HEqual welcomed the actions taken by Jo Swinson and the Yorkshire and Humber Liberal Democrats, but stressed that their actions did not go far enough. HEqual said that Noble’s comments would “continue to be representative of the Liberal Democrats” so long as the party has “sitting committee members who make and stand by such comments”.

The LGBT Liberal Democrats and the Secular and Humanist Liberal Democrats have yet to issue any comment. I reached out to the chairs of both committees as well as to Sarah Noble herself prior to writing this article. None have returned my requests for comment.

The Liberal Democrats currently take a robust stance on hate speech. They are currently championing a policy that would ban homophobic chanting on football pitches. Critics of hate speech laws say that they are too broadly drawn, and confuse the hateful with the merely politically incorrect. But as long as the Lib Dems defends the existing consensus, members like Noble, who are far more than just politically incorrect, represent a serious threat to their credibility.

The LGBT Liberal Democrats and the Secular and Humanist Liberal Democrats have yet to issue any comment. I reached out to the chairs of both committees as well as to Sarah Noble herself prior to writing this article. None have returned my requests for comment. However, a spokesman from Lib Dem HQ said “Sarah Noble’s comments are unacceptable. The party is taking the matter seriously and has asked Sarah Noble to apologise and remove the posts”.

UPDATE: Gary McLelland, Chairman of the Secular and Humanist Liberal Democrats (HSLD) has commented on the story.