Men make better chess players. They have what psychopathology professor Simon Baron Cohen calls “systematising” brains, whereas women have “empathetic” brains. But Nigel Short, a UK grandmaster player, got into trouble this week for pointing out this biological reality.

Short joins chess legend Garry Kasparov in speaking what for most people will be simple common sense: that men and women are wired differently. “Women, by their nature, are not exceptional chess players: they are not great fighters,” Kasparov has famously said.

Men, on the whole, have better reflexes and spatial awareness, while women are better empaths and communicators. Most people will experience something of this in their daily lives. Husbands know that although their better halves may risk the safety of the family by blithely turning into a fast-moving fleet of oncoming traffic, they nonetheless have the verbal dexterity to convince everyone in the car that it was somehow all dad’s fault.

This is the root of cruel but scientifically justifiable jokes about female drivers and the source of the phenomenon known as femsteering.

Claiming that that there is no basis in biology for any difference between the sexes at all is very fashionable. But it has no basis in fact. We know from research like Baron Cohen’s that there are differences not only in the types of thinking that men and women excel at, the games that they enjoy and their respective competitiveness but even in the way IQ is distributed between the sexes.

Women tend to cluster around the mean IQ score: that is, women are most likely to have IQs of between 90 and 110. Men, on the other hand, often reach greater heights in intelligence tests – but they also represent the worst performers too. That’s why there are vanishingly few sublime female geniuses in, say, music or philosophy, but it also explains why prisons are full of male knuckledraggers.

On the face of it, chess is a pretty feminist-friendly sport. There’s no pressure, no physical contact, no knowledge required besides basic board dynamics and the queen, who has all the best moves, leaps around the board striking terror into the hearts of knights and bishops, protecting the King. (Sometimes bishops take queens, but that’s a subject for another time.)

But the problem-solving and strategic intellectual virtues chess appeals to are uniquely male – not “retro sexism,” as my interlocutor in the video above, a black feminist called Reni Eddo-Lodge claims. And it certainly isn’t, as she suggests, “victim-blaming” to discuss why girls don’t seem to perform as well in the game.

IQ doesn’t explain everything, and it is said to favour caucasians and anyone brought up in the west. But in the case of chess, it’s precisely those skills that IQ tests that determine whether or not someone is likely to be good at the game. The simple fact is, there are more men with very high IQs than there are women, and IQ is a great indicator of chess ability.

Women are under-represented in the sciences, mathematics, physics and computers, and many women drop out of computer science courses and chess clubs, not because they are systematically oppressed or discriminated against, but because they keep losing.

Sorry if you find that offensive, but if it were not the case, there would be no need for female chess championships, because the best women would be able to play the best men and win. But they can’t: just 2 per cent of grandmasters are women. Even if there were some element of sexism involved, since IQ is 60-80% inheritable, there’s not much that social conditioning could do to change that statistic. 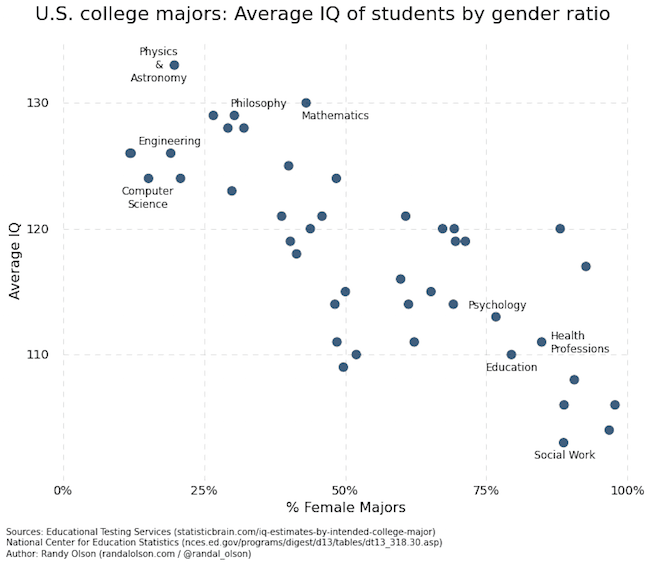 As anyone who has sat through the bottom-numbing hell of women’s football – or accidentally chosen the women’s final in their Wimbledon ticket application – will know, there are sports at which men simply perform better, whether because they have greater upper body strength, better stamina or, as in the case of chess, better problem-solving, logical brains.

Eddo-Lodge says that girls drop out of chess clubs around the age of 12. Ms Eddo-Lodge can’t work out why a child’s behaviour might change around the age of 12, so she attributes the lack of female participation in chess to “stereotypical thinking.” But no one is bullying women out of chess. As with other male-dominated professions and hobbies, women are welcomed in enthusiastically by the dorky blokes who play.

What’s remarkable is that feminists, rather than celebrating the unique advantages women have over men in many fields, and the contributions they make to literature and all manner of other disciplines, would rather disregard biological fact in order to present men and women as identical. Most of us know better.