A man in Dorset has been hurt after he was attacked by five men because of the UKIP poster in his garden.

Mark Smith was punched in the face by thugs who objected to the 8ft by 4ft poster on his own property and decided to rip it down.

When Mr Smith confronted the gang, they attacked him, pushing him to the floor and leaving him with injuries to his face, arms and legs.

The Bournemouth resident described the attack as “an infringement of freedom of speech”.

“It’s completely out of order, they shouldn’t be doing it,” he added.

Dorset Police confirmed officers were called to an assault involving five young men but that no arrests have been made. The men are believed to have left the scene by car before police arrived. 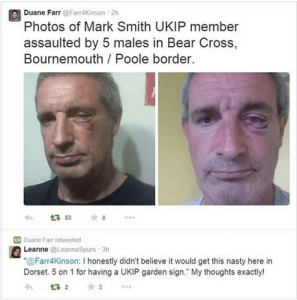 Dave Briggs, author of Nope, Not Hope which is keeping track of anti-UKIP violence during this campaign told Breitbart London:

“This campaign has been marked by increasing levels of violence directed against Ukip, its personnel and it’s property, and all accompanied by a near media blackout and police inaction.

“The perpetrators of this violence are the union sponsored thugs of the swp, uaf, hope not hate and stand up to ukip, who jointly are creating the very same climate of intimidation the claim to deplore. It is ironic that at a time when vast numbers of labour voters are switching ukip, their old party is relying not on democracy but revolutionary violence to,try and stop them.”