Now that Britain’s Conservative Party has won a Parliamentary majority, it has the opportunity to implement its campaign promise of requiring United Kingdom police to record anti-Muslim hate crimes. Muslims as victims of hate crime has become a familiar trope, although factual data have been lacking. A British government report published in December 2013 finds that “Muslim adults were the most likely to be a victim of religiously motivated hate crime.” Is this true?

A closer look reveals that another United Kingdom minority may be more embattled. Ranging from an assault with a baseball bat, to death threats, to being spat upon for wearing a head-covering, Jews have been increasingly targeted in the UK. In March 2015, the BBC reported, “the number of anti-Semitic incidents reported in the UK last year doubled.” The month before, the All-Party Parliamentary Inquiry into Anti-Semitism issued a report finding: “Disturbingly, antisemitism both physical and verbal has increased not just across mainland Europe but also in the UK… whilst there was a dip in incidents between late 2009 and 2013, numbers have approximately doubled since the late 1990s…”

UK police began collecting nationwide statistics about anti-Semitic crimes in 2008. They and other hate-crime statistics were officially reported by the Association of Chief Police Officers (ACPO) until 2011. Thereafter, the Home Office began publishing the official UK crime statistics. Home Office does not publish numbers about anti-Semitic crimes, although it publishes statistics about religious and other hate crimes generally. Police still track them unofficially and they are available on ACPO’s True Vision website.

Even during the ‘dip’ period noted in the All-Party report, anti-Semitic crimes accounted for 15.47%-33.75% of all religiously-motivated hate crimes.

(All chart numbers taken from ACPO, except for 2011/12, for which ACPO numbers were unavailable.)

The UK has recently tried to capture a more nuanced picture of hate crime through an addendum to its Crime Survey for England and Wales. The survey, a social science study of crime victimisation of UK residents, asks respondents about their experience of all sorts of crime. Begun in 1982, it is one of the largest social research surveys conducted in England and Wales. The survey was conducted for the Home Office until 2012/13, when responsibility was transferred to the Office for National Statistics.

Presumably by design, the percentages of survey respondents from each religious category approximate their proportion of UK population. That method may not be well-suited to analysing hate crimes, which typically target minority populations. Perhaps for that reason, the hate crimes report for 2013/14 did not break down the percentage of religiously-motivated hate crimes suffered by different religious groups.

The prior hate crime report, covering 2011/13, did profess to identify percentages of hate crimes committed against different religious groups. About .5% of respondents (roughly 405 people) were Jewish. Even so, the number of Jewish respondents was too small to be reported as a separate category. The effect was to downplay the incidence and statistical significance of hate crimes targeting Jews. Muslims, who form about 4.3% of the population under the 2011 census, were separately reported. Roughly 3.9% of survey respondents (about 3,159 people) were Muslim.

The 2013/14 hate crimes report noted an increase in religious hate crimes, speculating it may have been inspired by the May 2013 murder of Lee Rigby (by Islamist radicals). In other words, it implied the increase was attributable to more anti-Muslim crime. If true, it may represent a temporary spike (as happened in the US after 9/11) or a permanent increase.

Currently, UK authorities do not consistently track and report anti-Muslim hate crime. The Independent and Guardian reported that 24 police forces, or nearly half of the 43 police forces in England and Wales, do not record and report hate crimes against Muslims. London Metropolitan Police do. They reported 611 in 2014.

The claim, based on thin survey results and incomplete, non-empirical data, may be true in terms of raw numbers, but not per capita incidents. 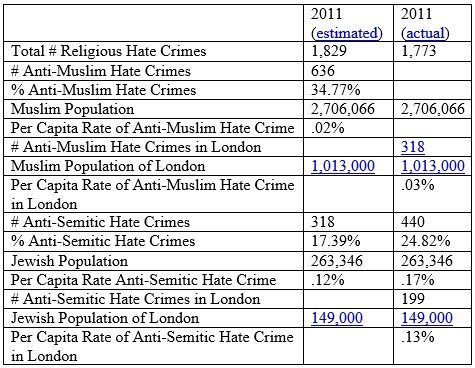 Yet, neither 2011/12 nor 2012/13 survey sampled enough Jews to report hate crimes against them. Given the findings of the All-Party Parliamentary Inquiry, that seems a significant oversight, and may explain why the subsequent report did not give a breakdown of hate crimes against particular religious groups.

Claims of Muslim victimisation play into the hands of those trying to silence critics of Islamist ideology, or seek special benefits for Islam. They are frequently used to change the conversation after violence perpetrated by Muslims in the name of Islam, portraying Muslims as victims rather than perpetrators (here, here, here, here, here, and here). It is well not to take such claims at face value.

It would be a welcome change if future government publications avoided reiterating “rhetorical, polemical” victimisation claims and instead evaluated empirical data of the scope and intensity of hate crimes against particular groups. Should the Home Secretary’s election promise actually be implemented, it would provide empirical evidence of the actual scope of crime targeting Muslims. Hopefully, the British government will also consider the proportional impact of hate crime targeting Muslim, Jewish, and other communities before considering whether and what additional resources are needed to combat it.

This article was sponsored by Larry and Brian Grodman.