In April, I challenged Feminist Frequency host Anita Sarkeesian to debate me some time around the E3 conference in Los Angeles this month. I offered a $10,000 donation to the charity of her choice. Well, E3 is looming and I’ve heard nothing. So what, dear reader, am I to do with all this cash?

Obviously, my first thought was to donate to the Republican National Committee, or the NRA, or a men’s rights charity. Or perhaps AIPAC, in honour of her producer Jonathan McIntosh’s virulent hatred of Israel. But, as amusing as those options would be, I don’t think any of them truly captures the mischievous democratic spirit of #GamerGate.

So I’m instead presenting six options for interested readers to vote on. What should I spend muh dollas on?

Thanks to the pearl-clutching of idiotic social justice warriors, Hatred, which was launched on Steam yesterday, is a massive hit. Yet another example of Yiannopoulos’s Law of Heckle Shekels. (Ideas for catchier names welcomed.) I know that Destructive Creations, the studio behind Hatred, probably doesn’t need the money, but 500 copies of this sadistic shoot-em-up would be a fitting tribute to Anita Sarkeesian’s cowardice.

One for each and every social justice brony on GamerGhazi, a tragically moribund anti-#GamerGate subreddit. I don’t mean to be rude about adult fans of My Little Pony, because frankly they need all the emotional reassurance they can get, but I have noticed that the “Friendship is Magic” crowd have an alarming predilection for authoritarian left-wing ideologies. I’ll forward the sketch books to whichever sad prat runs the GamerGhazi subreddit for further dissemination.

We call them “ladybirds” here in the UK, but apparently that’s patriarchal and old-fashioned, so “ladybugs” is the preferred term in the United States. Either way, everyone loves these aphid-munching little critters. Perhaps I’ll release 1.66 million of them outside the E3 venue in a glorious airborne tribute that’s actually about ethics in games journalism. 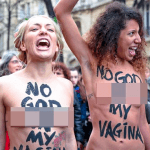 Useful for keeping unwanted wildlife off your property (see right), coyote urine is $27 a gallon on Amazon.com. For $10,000 you can buy 8 years’ worth of daily golden showers, or enough to keep feminists off your front lawn for about half a decade.

The stench is terrible.

Notorious #GamerGate critic Randi Harper, subject of a lengthy forthcoming Breitbart report, recently had to announce a move from San Francisco to… well, I can’t remember. Detroit or something. Mean-spirited critics say this is because you can’t make a living by being a tosser on Twitter (who knew!), but I take a more compassionate line and, channeling J S Mill, believe that having strong opponents is essential to healthy debate. So why not prolong her reign in the city of crazy and free up her personal finances so she can afford firewall software, superheroine bathing suits, and Vagenda magazine.

Also for Randi Harper. (We’ll throw in a fryer.)

The choice is yours!