The leaders of Germany’s anti-Islamisation movement PEGIDA have spoken out and praised India’s prime minister Narendra Modi, the Hindu nationalist with a track record of robust policy towards Islam.

Speaking to Indian politics and culture blog Scroll.in, Patriotic Europeans Against the Islamisation of the West (PEGIDA) founder Lutz Bachmann was full of praise for India’s prime minister, remarking “We need a leader like him in Germany here”. Modi has been repeatedly accused of turning a blind eye to violent anti-Islam riots in Gujarat when he was chief minister of the region in 2002, allowing 1,000 Muslims to be killed in retaliation to the deaths of 60 Hindus who were burned to death.

Despite the controversy over his views on Islam, Modi became India’s 15th Prime Minister in 2014. He has since governed the world’s third largest, and one of the fastest growing, Muslim populations. 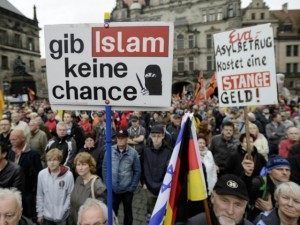 Colourful and creative placards are a key feature of PEGIDA rallies

Tatjana Festerling, who recently was the first representative of PEGIDA to stand for election in Germany, and who is a regular traveller to India, backed up Bachmann’s comments, remarking that it wasn’t just Germany who would benefit from a Modi-like figure. She said: “Not only in Germany, but the whole of Europe. We need courageous leaders who are positioning themselves against Islamisation.

“I know you have a lot of problems there, wherever you are in your country. We have lots of troubles with these people like you have.

“We are speaking against losing our culture. All northern European cultures are fading away. We have mosques all over. We have muezzins calling five times a day. In some cities, you will find totally different parallel societies. There is no concept of integration among them”.

PEGIDA came to global prominence around new years 2015, as weekly marches grew with unprecedented speed in Dresden, Germany. The Charlie Hebdo terror attacks gave them a final burst of impetus, regularly attracting 25,000 or more to their marches and witnessing dozens of imitation movements springing up all over Europe, but the German government began to act to shut them down.

Encouraging counter-demonstrations, using police powers to cancel marches at the last minute, and using the apparatus of the German state media to smear the organisation, it died back to a dedicated hardcore which remains committed to non-violent protest and resisting Islamisation today.