Breitbart London recently spoke to Dutch Party for Freedom (PVV) leader Geert Wilders on a wide range of topics from Mohammad cartoons, to Charlie Hebdo, to BREXIT, and even the future of Europe itself.

Breitbart London: The Dutch parliament has recently blocked an art exhibition you proposed to show a selection of cartoons featuring Mohammad. You are now due to show these cartoons on Dutch television this weekend – will the state broadcaster try to stop you too? And if you succeed in showing the cartoons this weekend, what format will the programme take?

Geert Wilders: “Dutch television cannot stop us from showing the cartoons. Every party that is present in parliament has time to show themselves on national TV, and by law they cannot be prevented from broadcasting. Anyone can oppose the programme, but only afterwards but not before.

“It will be like a walk though a museum – I will present the viewer a selection of the cartoons myself – first I will explain why I want to show the cartoons, because of what happened in Garland, Texas, and explain that it is not a provocation. We should do exactly what it is terrorists want to stop us from doing – otherwise the message we send to terrorists is that violence and the threat of violence can be effective. And this cannot be the case”

“We should protect freedom of speech, and we should not give in to terrorists. We should use the paper and pencil to win over those who use guns” 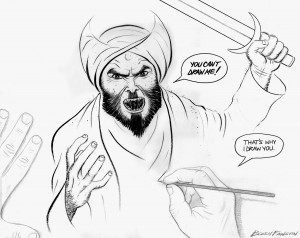 One of the many cartoons of Mohammad that have been blocked from publication in many Western countries by self-censorship among media editors.

You were present at the Draw Mohammad competition hosted by Pamela Geller in Garland, Texas which was attacked by Islamist would-be-terrorists. Should every western country have a draw Mohammed competition?

“Yes they should – and not as a provocation, either – but because we cannot allow violent terrorists to win. Every time they threaten or attack us because we use freedom of speech, we should make cartoons 100 times more. This can be the only reaction – terrorists must get the message that attacking us is just counter effective.

“Unfortunately if we don’t, like all the appeasers in the Dutch parliament and many other places, the signal is violence and the threat of violence will win – so we should show these cartoons all over the world. Sadly, not all are willing – but we are willing to show that freedom of speech in indisputable”.

Many staff at the satirical paper Charlie Hebdo were murdered by Islamists for their portrayals, and satirical attacks on Islam and their prophet. Do you identify with them?

“I am not a journalist, I am not a cartoonist, I am not a satirist, but I am a politician – and I support freedom of speech. So I support their idea to make cartoons – and I’m sure if there was a cartoon of Jesus, or of any other real religion, there would be no trouble. So I believe yes, you should be able to depict Mohammad without a death sentence. We live in the West, not Saudi Arabia or Pakistan”.

“All those leaders, even my own prime minister, all of these political leader appeasers from all over the Western world walked in Paris for freedom of speech, but they aren’t willing to show the cartoons. They have enormous double standards, they are weak. We need to take responsibility”.

Looking at the past ten years, in terms of the rise of right wing anti-extremist and Euro-sceptic parties measured against increasing Islamisation, in your view is the situation in Europe getting better or worse?

“Islamisation certainly is becoming a lot worse in Europe. I see a change for the better in the Vox Populi, the normal people on the street on any European country, but sadly the political elite is still appeasing, and multiculturalist at heart.

“However, if you look at the facts despite it only being a minority of Muslims committing those terroristic crimes, unfortunately there is a big group supporting them. I already made these points once in a debate with our Dutch prime minister in parliament that 73 per cent of the Islamic Population think that Dutch Muslims who fight Jihad in Syria are heroes. That is 73 per cent of one million Muslims in Holland.

“80 per cent of the Turkish youth in Holland, one of the biggest minority groups here say that violence against Christians and Jews is not a bad thing. In addition to that, a poll by the leftist-liberal Univeristy of Amsterdam found 11 per cent of Muslims in Holland – over 100,000 people – are prepared to use violence for the sake of Islam is Holland. Unfortunately, these figures are far worse now than they were five or ten years ago.

“Everybody is talking about the minority – of course it is a minority that uses the violence, but unfortunately there is a majority of these people who support the idea, and think they are heroes. This is a Trojan horse we have imported, people who are not even willing to assimilate to our society and adhere to our values and constitution. We have a problem.

“The good news is, the ordinary people are waking up. With the Islamic State happening, with Jihadis going and returning from Northern Africa and Syria, it is causing people to wake up to the reality of what is happening. The good news is that parties like mine are getting stronger all over Europe. Islam is getting worse, but there is a change coming because the people are fed up”. 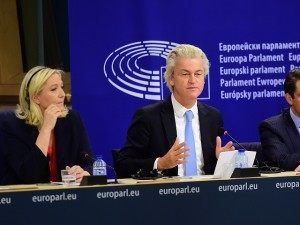 You have this week been part of establishing a new political group in the European Parliament with Marine Le Pen of the French Front National, and other parties like the Austrian Freedom Party and Italy’s Northern League. What are your main objectives for the Europe of Nations and Freedom?

“The European Union is robbing us of our national identities, our nation states. I believe a real democracy can only flourish when you have your own nation state, your own identity, even your own flag you can rally around. You need to be in charge of your own borders, money, immigration policy – this is lacking.

“I am sitting in our down Dutch parliament now. We don’t even have a Dutch flag here – all we have is a European flag on the roof. It is symbolic, it says a lot. At the end of the day, we are being led by afraid multiculturalists and cultural relativists who have lost sight of what society is really all about”.

Over the next year to 18 months, Britain will be preparing for a referendum on their continued membership of the European Union. What is your message to British Euro-sceptics who are looking for inspiration for the coming campaign?

“I am inspired by the British referendum, and I hope it will inspire the rest of Europe when Britain votes to leave the European Union. You are lucky enough to be out of the Eurozone – in Holland we have had billions in austerity measures, taxes being raised, just to pay for the countries in Southern Europe who are unwilling to raise taxes. It is a wealth transfer union.

“The European project has very little support outside of the political elite. Holland is like the United Kingdom, with so many laws coming from the European Union instead of our parliament or cabinet. Europe should be a continent of nation states who are free trading, with our own identities, not a bunch of Eurocrats nobody voted for.

“I really hope the people of the United Kingdom don’t vote against Europe – but vote against the European Union! That would inspire us Dutch, and the UK would be followed out by many other countries.”