The equivalent of “three major towns” crossed the Aegean sea to land on the islands of the Greek west coast, as a reported 28,260 illegals came ashore in just 20 days.

The figure, as reported by Greek defence-orientated news source OnAlert.gr, claimed that between June 23 and July 12 this year over 1,000 on average arrived every day, with 4,266 arriving over just one weekend in July. That the 28,260 arrived via the Aegean sea – a major point of ingress for illegal migrants into the European Union – suggests the sea voyages made started in comparatively peaceful Turkey rather than warzone Libya, where sailings to Italy often begin. 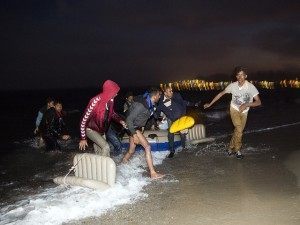 Although the flow of mainly Syrian refugees who attempted to reach Europe by land through Turkey before changing tactics to a sea crossing to Greece is not new, the sudden jump in quantity has taken Greece by surprise. The Daily Mail reported as recently as last month that the numbers arriving on the Greek Islands was hundreds every day, not thousands. So determined are those who wish to cross to Greece, some decide to even forgo the rickety boats many choose to cross into Europe with, and come on small inflatable boats, and even inflatable chairs and pool lilos as exceptional photographs of arrivals attest.

The report in OnAlert castigates the rest of Europe for obsessively focussing on Greek finances while ignoring what is claimed is a far greater crisis, which European leaders are treating with “indifference”. Suggesting most Europeans cared little for the migrant crisis which was swamping many Greek communities because their “squares and neighbourhoods are left untouched by the problem”, the piece quoted inside sources from the Greek navy and coast guard complaining they were left to patrol the sea without any assistance.

Breitbart London has reported in depth on the growing crisis in the Mediterranean, a loss of control over Europe’s internal sea that would have been completely inconceivable until relatively recently. With 137,000 known to have crossed into Europe this year alone, security and social services in popular destination nations are coming under significant strain. Police in Bavaria, the main point of entry to Germany for migrants travelling North has reported itself to be completely overwhelmed, with insufficient officers and obsolete computer equipment to record new arrivals.

There have already been more illegals entering Germany in the first seven months of this year than the whole of 2014, according to official estimates.