The winner of the ‘Miss Charming’ award at a Russian football (soccer) beauty pageant has been outed as a Neo-Nazi, after pictures and messages from her social media accounts were uncovered. 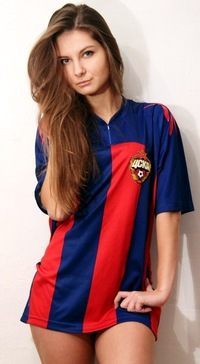 Kuzkova in her CSKA Moscow Shirt

Olga Kuzkova, a 21-year-old fan of the highly ranked CSKA Moscow team was entered into the pageant by the club’s management, which like all other Russian teams, picks from its female fans each year for a showdown to determine who has the hottest supporters.

But her victory was short-lived after details from her VKontakte (Russia’s Facebook) page were disclosed, revealing her darker, less charming side.

One of her posts contains the code numbers for “Heil Hitler”, while others are more overt, brandishing Nazi armbands, and a picture of her with her boyfriend that reads, “White Love”.

Her boyfriend also has 14/88 tattooed on his legs, representing the 14 words of White Supremacist and KKK member David Lane: “We must secure the existance of our people and a future for white children” as well as the eighth letter in the alphabet, H, twice over, meaning “Heil Hitler”.

In one picture, Kuzkova gazes into the camera, her right hand extended in a Nazi salute as she stands in front of a wall bearing Nazi graffiti.

Another features two photos spliced together. The first shows a Cadbury Bubbly bar — a popular candy bar made up of a series of oddly-sized chocolate spheres. The second shows a group of small African children, clad in dirty clothing, posing for a group shot in what appeared to be a remote village. Insinuating that the children and the chocolate bar looked alike, she wrote, “I love chocolate, but after this image I developed an… aversion.”

Russia Premier League executive director Sergei Cheban said in a statement: “We do not tolerate displays of fascism, nationalism, or racism. It’s unfortunate that this happened. Nevertheless, I ask you to try to understand the situation and the person. We all make mistakes in our youth, and sometimes take the wrong path. Who is without sin? Some mistakes are easier to correct than others. I would be happy if this whole story helps Olga sort out her views on life.”