LONDON, United Kingdom – UKIP leader Nigel Farage has said Eurosceptics need to get “off their backsides and join this fight” to win the EU referendum, and that Europhiles already have a massive head-start.

Addressing a crowded hall in central London, Farage took particular aim at Eurosceptics who were urging the campaign to wait until Prime Minister David Cameron had finished his EU renegotiation, remarking that the status-quo ‘yes’ campaign was already under way and if things didn’t get started now, it would be too late to save Britain.

Responding to journalists’ questions about whether he was the best person to lead the ‘out’ campaign, Farage responded that he was not seeking to lead it himself, but at present if he didn’t there wasn’t any one else who would.

After stressing that it was more important for the out campaign to get its message across rather than bicker internally over who should lead the movement, Mr. Farage said many prominent Eurosceptics who had been calling over decades for change had gone to ground. He said they suddenly appeared afraid to challenge the Prime Minister, who despite the outcome of negotiations will certainly lead the campaign to stay in.

Farage called on Eurosceptics to not be reactive to events in the lead up to the referendum, but rather to “set the agenda”, and to remind the prime minister that what the British people truly want is to regain control over Britain’s borders. Citing the migration crisis as an example of the problems open borders creates, Farage said it was no wonder this was a concern with the “scenes at Calais, every evening and every day”.

He said “The EU’s common asylum policy means limitless numbers of people can come onto the continent… all the French authorities need to do at Calais is to grant asylum status to all 5,000 people there, give them French passports, and they will all be free to come to the United Kingdom without having to climb on the back of a truck.”

Received with enthusiastic applause, Farage spoke of his plan to invigorate the ‘No’ campaign and to engage the whole of Britain. He said Eurosceptics now have the “political opportunity of a generation”, but that it was “hopeless in a marathon-race of this referendum to give the Prime Minister and the ‘Yes’ side a 13-mile head start”. 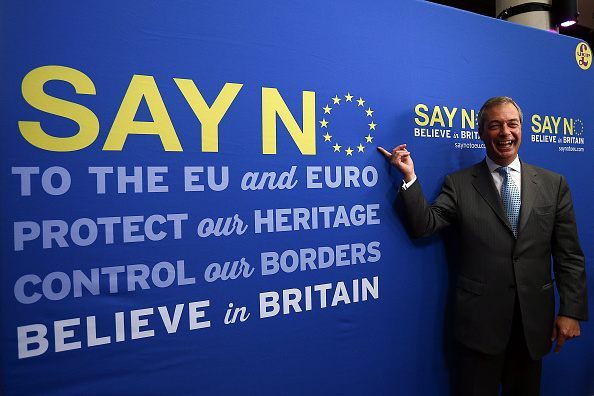 The UKIP leader emphasised he was not exaggerating when he said UKIP would be hosting “literally hundreds” of public meetings across the country in the coming months, and that the party would launch a “major ground campaign”. UKIP would undertake: “the biggest public outreach programme this party has ever attempted. We are doing it because we want our country back, because we genuinely believe the best people to rule Britain are the British themselves”. He said UKIP was uniquely well suited to perform this task out of all Eurosceptic factions, as it had a nationwide network of 300 branches in every constituent country, England, Wales, Scotland, and Ulster.

He said: “We cannot allow Cameron to go into this re-negotiation unchallenged, we cannot allow the yes side to have the massive head-start they have in the polls and the campaign in the country, and I would say to Eurosceptics of every hue in Britain, we’re going to be out there from the first of September. Come and join us”.

Speaking of who he saw as being key to the major ground campaign, Farage said that politicians should be willing to step back and allow celebrities, sports stars, and business people to get involved. Remarking that politicians often had too high an opinion of themselves and that many ordinary people had never heard of them, he stressed he wanted to see whoever would be effective at reaching out to voters to take the stage, regardless of background.

There was time for some more light-hearted questions as well. Asked for his opinion on the Labour leadership battle, Farage called it “terrific” and that it was so entertaining he was considering watching that instead of the cricket. He said to open up membership at “£3 a go” was a mistake that even a new party like UKIP would “never, ever make”.

UKIP will be formally commencing its ‘Out’ campaign this weekend.