Official figures released today have revealed that the number of EU migrant workers has jumped to a dramatic TWO MILLION people, a rise of four per cent on the previous quarter.

ITV News notes there are 973,000 workers now in the United Kingdom who were born in eight ‘A8’ eastern European countries, including Poland and the Czech Republic.

Commenting on the figures, Lord Green of Deddington, Chairman of Migration Watch UK said: “The number of EU workers has now topped 2 million for the first time and over one million of these are from Eastern Europe. Clearly the government is going to have to get a grip of EU migration if it wants to bring overall numbers down.”

Steven Woolfe MEP UKIP Migration spokesman commented: “On top of the hundreds of thousands or so illegal migrants working in Britain which the government seems, only in this summer of Calais chaos to have woken up to, we have yet further evidence of the arrival of legal EU migrants making up a larger proportion of the UK workforce.

“Of course the trouble is the government has no rights to control this seeming unstoppable flow of people from the EU. It has never been clearer that the UK’s borders are open to all whenever, wherever and however migrants want to come.

“The government has lost all control of any significant measure by which we can assess success in managing immigration. In his so-called renegotiation of UK EU membership the Prime Minister’s number priority must be to stop the free movement of people into the UK from the EU. Unless, the government can rip up our EU treaty obligations to let anyone from the EU into thew UK to live and work, mass uncontrolled wage reducing immigration that adversely impacts Britain’s working people will continue.” 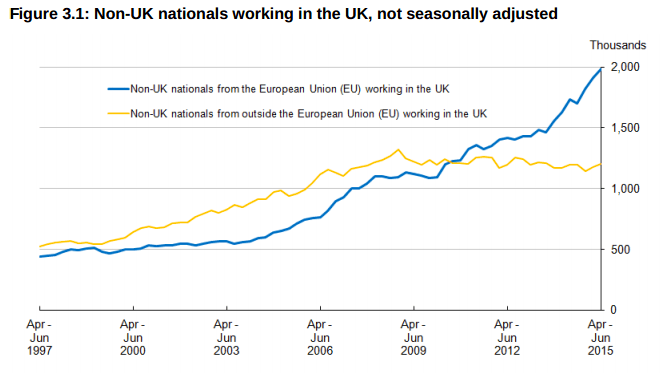 UK unemployment has increased by 25,000 over the last quarter, though the number of people claiming jobseeker’s allowance last month fell by 4,900.

The Telegraph notes: “There has also been a significant rise in the number of Romanians and Bulgarians working in the UK, from 147,000 when restrictions were lifted in January 2014 to 189,000 in April to June 2015.”