A Guardian contributer, Richard Seymour, has sparked outrage today after dismissing a British war hero’s comments on the Falklands Islands, in which he attacked Labour leadership candidate Jeremy Corbyn for planning to “surrender” to Argentine demands. Seymour slammed war veteran Simon Weston on Facebook, claiming, “If he knew anything, he’s still have his face”. Weston was horrifically burned in the Argentine attack on the RFA Sir Galahad in 1982.

Seymour, who is the author of the Lenin’s Tomb blog was responding to the article published by the Telegraph, posted by a Facebook friend of his. In the article, Weston noted of Mr Corbyn’s plans: “It is a repugnant idea. I don’t see why it should happen given that the Argentines never had the islands. They have no right to them.

“It could cause civil war again by emboldening the Argentinians. It frightens me enormously because he claims to be such a supporter of democratic freedoms while what he is suggesting throwing the Falkland islanders right to democracy out.

“I don’t ever see him winning an election because his policies and his attitudes just won’t wash with the British public.”

Seymour didn’t quite see it that way. But instead of responding to Mr Weston’s points, he wrote beneath the article: “Seriously, who gives a shit what Simon Weston thinks about anything? If he knew anything he’d still have his face.” 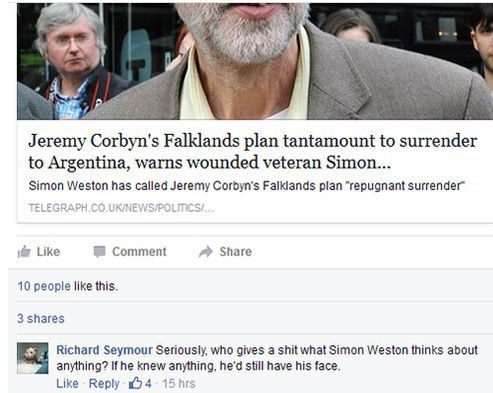 The Guido Fawkes blog notes that while Seymour was a fortnightly contributor to the Guardian, he claims to have only had a freelance contract for three years. His latest article for the paper was published in December 2014.

Mr Weston suffered 46 per cent burns while fighting for his country during the Falklands War. He recalls his memories immediately after the Sir Galahad was bombed: “My first encounter with a really low point was when they wheeled me into the transit hospital at RAF Lyneham and I passed my mother in the corridor and she said to my gran, “Oh mam, look at that poor boy” and I cried out “Mam, it’s me!” As she recognised my voice her face turned to stone.”

Mr Seymour seemed unapologetic for his comments on Twitter, responding to critics simply with the fact that he opposed the Falklands War.

“Why would I want to go and fight for an empire I don’t believe in? What would be remotely heroic about that? It’d be stupid.” he said.