The German language website Frankfurter Allgemenie has reported on how the British media “reports on the crisis differently than the German” media. If what is written is true, it is shocking.

The newspaper explains: “When it came to clashes between Hungarian border guards and refugees, the BBC showed young men who threw stones.”

The rioting, fit young men were of course described as “hungry”, “desperate” and “defensive,” but at least the images were shown. The suggestion that such a key part of the developing story was omitted on German TV is a startling one.

“On [German channel] ARD Tagesschau,” Frankfurter Allgemenie reports, “the most dramatic pictures could not be seen – instead, women and children, fleeing the tear gas by security forces [was shown]… German television suggesting disproportionate action by Hungary, however the BBC reported of the “defense of the borders.””

This was not an exclusive German phenomenon, however.

The picture (above) of a migrant girl crying from the effects of tear gas was also widely circulated in the British media. However, as the video below clearly shows, she was dragged in front of the rioting young men (by what looks to be a white activists) purely for the purposes of a photo.

Other images show the men using the small number of children present as a human shield for the cameras.

“The British pay close attention to security questions; often authorities are quoting figures and estimates of how many of the migrants are terrorist suspects,” the article continues.

But, the only person prepared to stick their neck out and posit the question of Islamic State (IS) infiltration within the migrant crowds on British television is UKIP leader Nigel Farage. Usually, his quotes are embedded in such away to imply his view is fringe and not to be trusted.

Well, at least it is represented, unlike on German TV. 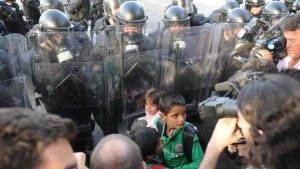 Frankfurter Allgemenie continues: “After reading the British media – supported by international statistics – many people who are currently pushing into Europe are not under imminent threat to life and limb, but leaving secure holding regions without war or persecution. That’s why most of the media do not speak of “refugees”, but of “migrants.””

Which is partly true; the British media uses the two terms interchangeably.

However, as Breitbart London’s Editor-in-Chief reported this week: “The United Nations Refugee Agency reported last week there were 72 per cent men, 13 per cent women, and just 15 per cent children making the trip to Europe by sea.”

The article concludes by describing the Germany media’s insistence on framing an “openness to the world” as part an intrinsic part of German of identity, and the “welcoming culture” as a specific expression of their “national experience.”

If the Frankfurter Allgemenie article is accurate, it is little wonder there has been so little balance, critical discussion of the migrant crisis there. The German people are simply not being given the facts to make informed, democratic decisions.