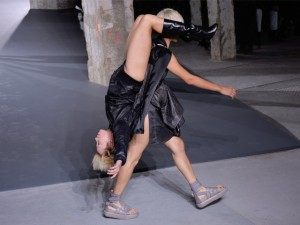 PARIS, FRANCE – OCTOBER 01: Models walks the runway during the Rick Owensshow as part of the Paris Fashion Week Womenswear Spring/Summer 2016 on October 1, 2015 in Paris, France. (Photo by Francois Durand/Getty Images)

Variety is the spice of life, so anyone looking to adopt the new look can make a choice between wearing a lady as a necklace (pictured above) or a backpack (see right).

The Rick Owens Spring/Summer 2016 Collection is called ‘Cyclops’ and fortunately for the uninitiated he has been kind enough to set out what it he is trying to achieve with his designs.

Apparently it is intended as a comment on female strength and mutual support, which may be a tribute to his wife, muse, creative collaborator and business partner, Michèle Lamy.

In a statement released after the show he explained:

“The Cyclops is a mythological creature, formidable with focused vision. Who among us wouldn’t appreciate that kind of description? In the spring men’s collection, which shares the same name, that focused vision was propulsive and aggressive. When applied to women, I see that focused vision being more about nourishment, sisterhood, motherhood, and regeneration. Women raising women, women becoming women and women supporting women. The world of women I know little about and can only attempt to amuse in my own small way…

…Straps can be about restraint but here they are all about support and cradling. Straps here become loving ribbons.”

Some say the show is in the running for being the most bizarre ever, although they are probably forgetting Owen’s own show in which he sent men down the catwalk in what were described in Metro as “monastic-style tunics complete with, um, pubic air holes”.

Despite the clarification offered in Owens’ show notes, reaction is still understandably confused.

This #RickOwens thing must be a joke. Not chic. Just no. pic.twitter.com/hchETxkDk0