A Swedish artist has been investigated by Danish police after a political stunt calling attention to the dangers of Europe’s porous borders was reported to the authorities. 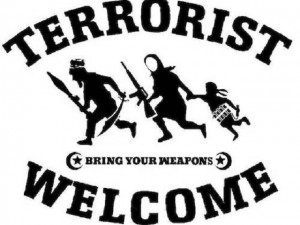 Artist Dan Park had mocked up flyers satirising the now-familiar Refugees Welcome trope, a symbol adorning protesters placards, stickers and posters all across Europe. Substituting the fleeing family, itself a gross misrepresentation of the majority of so-called refugees who are fighting-age men, the flyer instead shows gun-toting Muslims and a child wearing a suicide bomb belt.

Putting his flyers into home post boxes in the Danish town of Silkeborg, Mr. Park had hoped to direct “as much attention as possible” to the issue of terrorists sneaking into Europe, disguised among the migrant hordes.

Although the stunt may have triggered critical thought among some of those who received the flyers, he also received a dose of attention himself from local police.

The Silkeborg force initially decided to investigate Mr. Park for making threats and inciting terror, but could find no grounds to charge him for the political satire. Instead, he and his assistants who helped him flyer the area will be fined 1,000dkk (£100) each for posting the flyers in unauthorised spaces, reports TheLocal.dk.

A police spokesman said of their decision: “The three people who were part of the distribution will be charged with hanging the posters on, among other things, electrical boxes. That is not legal. On top of that, they received an admonition that they think twice before doing something like that again”. 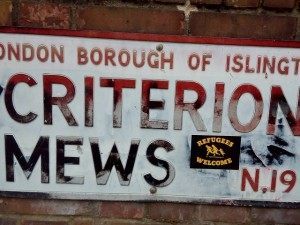 This is not the first time Mr. Park has seen controversy stem from his work. As well as being sentenced to six months behind bars for racial agitation in 2014, his works have also prompted violence and death threats.

A Copenhagen art gallery cancelled an exhibition of his works in 2014 after death threats were made against the gallery owner and his family for showing the art.

Concern about terrorists posing as refugees and economic migrants is a recurring concern across Europe. Breitbart London reported on the decision of one small-town mayor in France to only accept Christian refugees to avoid the possibility of taking in “disguised terrorists”. Throwing open the doors of Roanne in the Loire to the needy and remarking that the town would play it’s part in integrating refugees, the mayor cast a cautious note saying:

The French government reacted furiously to his suggestion, with the interior minister blasting the comments as “dreadful”.