A senior member of the Sweden Democrats has rebuked a BBC news article portraying his party as being Neo-Nazi and violent, Breitbart London can exclusively reveal.

The BBC has joined ranks with the Swedish mainstream media in launching a hit-job on rising star party, the UKIP-like Sweden Democrats. Despite ostensibly working as an unbiased public news corporation, the analysis piece on the recent significant gains the Sweden Democrats opened by dragging up decades-old links with the Europe’s far right movement.

Sweden Democrats Member of Parliament compared the article to regular pieces in the Swedish domestic media, calling it “a coordinated media campaign to silence the growing resistance to immigration”. 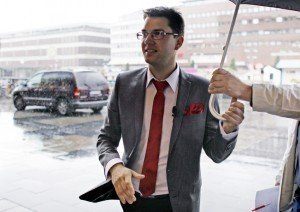 Regardless, the Sweden Democrats are one of Europe’s youngest political parties – Jimmie Åkesson took over leadership of the party aged just 26, and many of their most influential members of parliament and activists are in their late twenties and early thirties.

The extremist roots which the BBC claims – and decided to characterise as ‘Neo-Nazi’ – are not only hotly contested, but also took place while the party’s current leadership were still at junior school, or before some were even born.

The piece, which explores the sudden and growing popularity of the Sweden Democrats — they were polling as the most popular party in the country in August — also took the effort to recycle the idea that the party was directly responsible for a rash of arson attacks in Sweden recently.

Targeting buildings in the process of being converted into migrant accommodation, the fires have pushed the Swedish government to keep the locations of future centres secret. A number of journalists and even the Swedish foreign minister have attempted to link the fires with the Sweden Democrats. Social Democrat minister Margot Wallström told journalists:

“Their rhetoric feeds fears. It can become the trigger for attacks for those who have evil thoughts and are themselves afraid”.

Speaking to Breitbart London, senior Sweden Democrats member of parliament and justice committee member Kent Ekeroth said of the BBC article: “the media is desperately trying to blame us for arsons in an effort to even further try to put the lid on the immigration debate.

“By doing so they are further stigmatising ordinary people from voicing their concerns since they will be afraid to be branded by the media. Of course the Swedish media knows this and I think it’s a conscious strategy to do what the media have always done: tried to silence the necessary debate on immigration.

“It even went so absurd that the columnist Per T Ohlsson tried to make a point by highlighting that we sell lighters at our party’s web-shop and that means that we encourage arson! Obviously a totally deranged thing to write, but goes to show how deranged Swedish media have become. And how desperate. They also want to hide where new asylum housing is to be data showed so the public cannot react to it.

“It’s a coordinated media campaign to silence the growing resistance to immigration”.

The BBC article moves on to quote interviews with young Sweden Democrats members, who the BBC describes as having shifted their allegiances from centre left and right parties to the Democrats out of frustration. Jenny Ribsskog said of her decision: “The situation here is completely out of hand. We have no work, no schools, no housing for the migrants. The government is talking about putting them in tents for the winter. It’s worrying”.

The BBC reports more migrants arrive in Sweden every fortnight then the United Kingdom plans to take in the next five years. The report concludes: “Trains carrying migrants to Sweden arrive all day, every day”.