The Royal Australian Army Chaplains’ Department is to lose their traditional motto held since 1913, because it is offensive to Muslims. 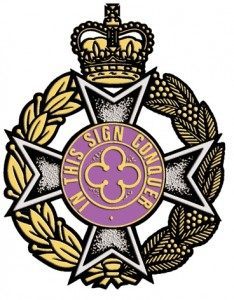 The cap badge and motto of the Australian army chaplains is presently identical to those held by the British army, a legacy and tradition dating back to the founding days of the Australian nation as it established itself as a Dominion independent of Great Britain. Emblazoned on a Maltese cross and wreath in purple and gold, the motto ‘In This Sign Conquer’ is thought to be a reference to the crusades.

Now just five months after a Muslim Imam joined the Australian forces religious advisory committee, that history is to be swept away, reports Australia’s Daily Telegraph. Despite the sudden push for change, there is not thought to presently be a single Australian Muslim chaplain in the army.

The chaplaincy of the Australian army, like the armed forces of many Commonwealth nations has traditionally had a number of badges to suit different occasions and roles. Chaplians also wear badges derived from the Templar cross, the Latin cross, and the star of David.

Australia is not the first force to erase their Christian heritage for fear of giving offence. The cap badge of the Canadian chaplaincy had both the motto and crosses removed in 2006 when the service went officially ‘multi-faith’. One of the new Canadian badges even features the Muslim crescent.

Australia’s flag also incorporates the flag of St. George in the canton, another highly visible historic symbol of the crusades. Like in New Zealand, which is presently voting whether to adopt a new flag and do away with their colonial heritage there is a long running debate in Australia about whether they should change. 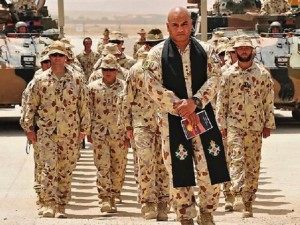 Bernard Gaynor, a former Australian army major who had his commission stripped for his political views is now standing as a political candidate in next year’s election. He said political correctness in the army was clear to see, and the appointment of an Imam to the military faith board was a strong example. He said of the change:

“The government must stop the political correctness. It must dismiss the Defence Imam for his views. And it must put Australia first”.

Incredibly, army chaplains themselves are thought to have been pushing for the change. Ironically it is often protestant churchmen who work hardest to accommodate Muslim sentiment — as reported by Breitbart London last month the lesbian Bishop of Stockholm also demanded changes made to not offend Muslim guests.

Bishop Eva Brunne asked for crosses to be removed from one Stockholm church and have the direction to Mecca marked for easy setting out of prayer mats. To do any less would be “stingy towards people of other faiths”, she said.