A major European Union (EU) diversity conference has been cancelled at the last minute, after host-city Brussels’ ‘diverse’ population were judged as a terror threat, rather than something that needed celebrating. 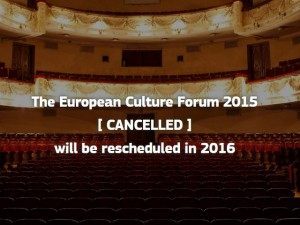 The EU Culture Forum’s diversity project is suffering from an excess of diversity / http://ec.europa.eu/culture

Home of the European Parliament and a number of associated European Commission and Council buildings, Brussels has also hosted since 2007 the “landmark” biennial European Culture Forum.

Posting on the official Culture Forum page, the organisers of the event announced the cancellation, stating:

“Security update — This afternoon, the European Commission security services have announced that bigger events organised by the Commission taking place on external premises (not in Commission buildings) are to be cancelled until further notice, in line with the recommendations of the Belgian authorities”.

“We are very sorry, as we know how much you were looking forward to attending this event, which we had been preparing for over a year. Our apologies as well to those of you who are already on their way to Brussels”.

Conceived as a means for the European Union to promote “cultural diversity and intercultural dialogue”, the events have brought together “stakeholders” from across the Union to discuss how “culture can be positioned” to further the goals of the EU. At the 2015 conference, due to kick off this morning but cancelled unceremoniously this week delegates were due to discuss engaging topics including using “talent and creativity for diverse and cohesive societies”.

Enacting policies to force diversity on member states, this celebration of diversity has fallen foul of the unintended, yet clearly foreseeable consequences as mass migration destabilises Belgium. The national government has been forced over the past two weeks to place the capital into lock-down and is now batting off accusations that a nation at the heart of Western Europe is now a “failed state”.

The capital city has been on the highest alert since the Paris massacre, which was revealed to have been launched from Belgium, a so-called “sleeper country” where radical Islamists can hide and plot without disturbance from the security services.

A large part of Brussel’s problems have reportedly stemmed from the socialist policies of mayor Phillipe Moureaux, who pushed an agenda of multiculturalism and diversity over the twenty years he spent in the office, reports Breitbart London.

The European Union’s culture programme has a budget of €1.46 billion and funds projects hundreds of thousands of projects. According to the European Commission website, the money is used to fund artistic endeavours that promote “cross-border mobility”, encourage “transnational circulation”, and foster “intercultural dialogue”.