A solemn hymn released by the Patriotic Europeans Against the Islamisation of the West (PEGIDA) unexpectedly hit no.1 in the German singles chart in time for New Year’s Eve, but distributor Amazon has signalled their displeasure by giving away their profits to a pro-migrant charity.

The wordless hymn pushed even top-selling artist Adelle aside in time for the New Year’s Eve best seller list, as supporters of the anti-immigration and pro-Western culture group rushed to buy the single. While it has been panned in the left-wing press, PEGIDA founder and leader Lutz Bachmann reached out to his opponents in the mainstream media and thanked them for generating so much publicity for the song.

Yet some have been disturbed by the success of the hymn ‘Together We Are Strong’, including online music giant Amazon who have promised to snub PEGIDA by donating their cut of the proceeds from sales to a pro-migrant charity. A spokesman said: “Amazon’s profits from selling this song will go to a charitable organization for supporting refugees”, reports TheLocal.de.

The PEGIDA leadership have also vowed to give their profits to charity — although presumably not one that supports mass migration. 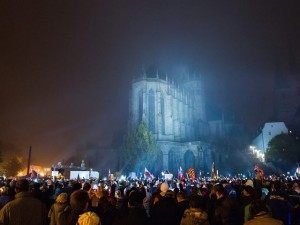 Such snubs to the patriotic group are by no means unusual. From the earliest days of the strolling movement elements of the German establishment have colluded to freeze the group out of public discourse, and a number have made symbolic protests to display their distaste.

One of the most visible signs of this is the turning off of street lights and illuminations of prominent public buildings when PEGIDA are walking or rallying nearby. Dresden’s opera house, which also flies banners displaying anti-PEGIDA messages outside and Germany’s left-wing establishment church most often indulge in these protests.

PEGIDA members themselves have found a way to get their own back on these buildings, and illuminate the sites themselves with smartphone lights and torches.