A second wave of migrants is set to break across Europe as the wives and children of men who have already made the journey set out to join them. According to European Union law, migrants already settled in member states are entitled to bring their families to live with them in their adopted country as part of their right to a family life.

As January draws to a close, the demographics of those arriving by boat in Greece has already shifted, revealing the changing face of the migration crisis. 2015 was characterised by predominantly male migration – 73 percent of those landing on Greek shores last summer were men.

But that figure has already dropped to 45 percent, while the number of women has doubled. Greece has also seen a huge rise in the number of under 18s arriving; they now make up a third of migrants landing on the Greek Islands, according to figures from the UN’s Refugee Agency. 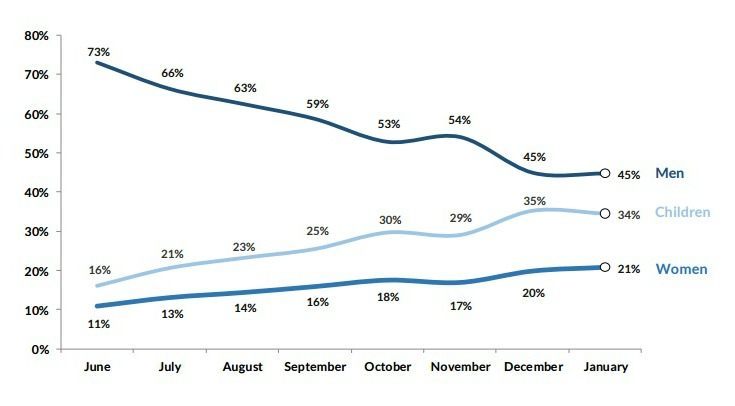 Migrants from Syria the most demographically mixed; men make up just 47 percent of new Syrian arrivals in Greece. The figure suggests that huge numbers of Syrian men who travelled predominantly to Germany in 2015 – thanks to Chancellor Angela Merkel’s offer of automatic asylum for anyone with a Syrian passport – are now settled and bringing their families to join them.

However, it has also been suggested that children in particular are increasingly making the trip as European countries are more inclined to grant them asylum, allowing their families to later join them.

In the UK, any migrant under the age of 18 automatically becomes the responsibility of the local authority which first registers their arrival. That local authority is expected to pay for their housing and schooling until they reach the age of 18. Last year Kent County Council warned of a massive hole being created in its budget thanks to the number of unaccompanied children who were being ferried across the Channel at Dover and abandoned by the side of the road.

The number of these so-called ‘grappling hook kids’ has exploded in the last year or so – Sweden recorded the arrivals of nearly twice as many unaccompanied children in 2015 as it did in 2014, which itself saw an 80 percent rise on the previous year’s figures.

A more detailed breakdown of the numbers arriving into Italy over the last year shows the scale of the issue: unaccompanied children outnumbered accompanied children by a factor of ten to one in December of 2015, and were the second largest demographic after the men.

With the number of lone women travellers also on the rise, migrant rights organisations have urged European nations to do more to protect the women as they travel. Many migrant shelters on the routes through the Balkans lack segregated accommodation for men and women, and there are numerous reports of rape and sexual assault by the male migrants.

“The health and rights of victims of wars and persecution, especially women and adolescent girls, should not be treated like an afterthought in humanitarian response,” said Babatunde Osotimehin, executive director of the UN population fund, UNFPA.

Vincent Cochetel, the director of UNHCR’s bureau for Europe added: “Many women and girls travelling on their own are entirely exposed, deprived of their family or community to protect them. Even those travelling with family are often vulnerable to abuse.”