The Russian foreign minister has become involved in an unusual democratic spat with Germany over the alleged cover-up of the gang rape of a 13 year old Russian citizen in Germany by “Arab-looking men”. 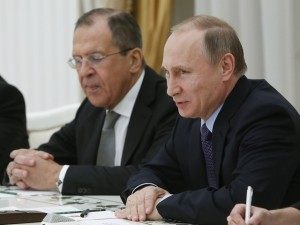 German police have claimed the disappearance by the 13 year old daughter of a Russian migrant family for 30 hours on January 11th, and her use as a “sex slave” by a trio of Arab men had been consensual, and no kidnap or rape had been involved.

Russia disputes this version of events, with Russian media reporting the girl had been taken from her family and passed around the three men for hours on end.

Sex with a 13 year old girl, whether consensual or not, is a crime in Germany, yet there have not yet been any arrests.

The persistence of reports in the Russian media about the case has now led the Russian foreign minister Sergei Lavrov to become involved, accusing Germany of papering over the cracks and covering up her rape.

Speaking at a press conference yesterday morning, Mr. Lavrov said of the young girl who has only been identified as ‘Lisa F.’, that she had “clearly not voluntarily disappeared for 30 hours”.

Mr. Lavrov said the German authorities had in the past shown a tendency to “paint over the reality of domestic politics for reasons of political correctness”.

The story, coming so soon after the mass sex assault and rape of European women by migrant males in Cologne and other German cities at New Year, and multiple molestations and rapes at swimming baths has excited Germany’s sizeable Russian migrant community.

Thousands of Russian-German citizens rallied at the weekend in German cities, including a demonstration of 700 in Berlin outside the Chancellery, declaring solidarity with the girl and carrying banners declaring “stay away from our children”.

The news story and alleged coverup is threatening to develop into a major diplomatic incident, after Mr. Lavrov’s involvement and a German lawyer filing charges against Russian state television. He accuses a journalist of the channel of making unproven assertions by reporting Germany is suffering from mass migrant rape, reports Der Spiegel.