A clapped-out old Volkswagen converted into a ‘Sharia police patrol car’ for the amusement of crowds in Maissau, Austria is under investigation by police under suspicion of being ‘racist’. 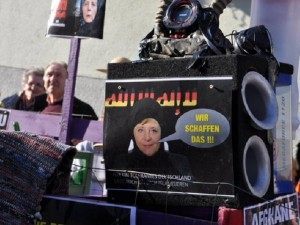 German police have had a number of carnival floats offensive to the new status quo to investigate this week, including ‘Asylum Defence’ Tiger tanks and steam trains bringing plagues of foreigners to central Europe, but now Austria’s Polizei have their own. Dubbed the ‘Shariah Police’, the float is an imaginative vignette of life in Austria in the year 2020.

Piloted by a mannequin of Austrian Chancellor Werner Faymann, the car was adorned by signs reading ‘Sharia Police’, images of executed men who had offended the laws of the Islamic State, and images of German chancellor Angela Merkel in a Burka proclaiming “we are making a tolerant Germany”.

One sign on the car satirised the world-famous Austrian energy drink Red Bull, with the company slogan changed to ‘Islam gives you wings’.

While most carnival floats, which traditionally parody contemporary politics and events are protected by freedom of expression laws and the constitution in Austria, police may give particular attention to the mocked-up licence plate ‘ASYL 88’. In some communities 88 is used as shorthand for the Fascist salutation ‘Hail Hitler’, H being the eighth letter of the alphabet, reports Der Kronen Zeitung.

The mayor of Maissau distanced himself from the carnival float, remarking that in terms of political satire the car had “overshot the target”, and in any case he didn’t even know it had been entered into the carnival until it had already started.

While Sharia Police may be a fiction in the Austrian town of Maissau, such patrols have been observed elsewhere in Europe. Breitbart London has reported on the self selecting guardians of Sharia law and public morality which have found expression and a space to enforce their views in East London and Germany, and the recent arrest of one such activist.

European convert to Islam and Sharia Police founder Sven Lau was arrested in December on suspicion of having supported a terrorist organisation Jaish al-Muhajireen wal-Ansar in Syria. He was accused of recruiting jihadists for the al-Nusra cadet branch and sent night-vision goggles to them which he disguised as humanitarian aid.

He had previously been known for telling people in the German city of Wuppertal to give up alcohol, gambling, and listening to music in accordance with sharia law.