Five London buildings of the British central governmental administration are now run in accordance with sharia law – including a strict ban on alcohol – after they were pawned off to Muslim buyers as part of an Islamic bond scheme. 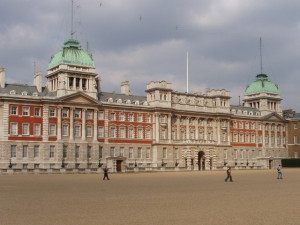 The Old Admiralty, a building closely associated with many Royal and state occasions, and four other Whitehall buildings must now comply with some aspects of sharia. The rules came in under the terms of special bonds known as sukuk, launched by George Osborne two years ago when the UK became the first Western country to issue them.

The bonds are designed to encourage Muslim investors to buy up British assets, as they avoid Islamic taboos around paying interest, drinking alcohol and gambling.

Furthermore, Parliament itself may become subject to the sharia conditions if it is moved to Richmond House, the favourite choice for a temporary venue when essential repairs are carried out on the palace of Westminster, as already reported by Breitbart London.

In November 2013 the World Islamic Economic Forum was hosted in London, where Prime Minister David Cameron announced: “I want London to stand alongside Dubai and Kuala Lumpur as one of the great capitals of Islamic finance anywhere in the world.” 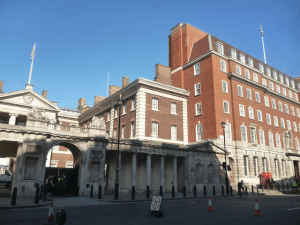 22 Whitehall, also part of the scheme

Secretary to the Treasury Sajid Javid MP ​said​ that, “almost every international Islamic contract will touch London – or a London-based firm – in some way.”

Since the chancellor launched the Islamic bonds in in 2014, individuals and funds from the Middle East and North Africa have bought more than £200 million in the ‘sukuk’ bonds.

They have proved to be incredibly popular and are more than ten times oversubscribed, as central banks and sovereign wealth funds in Gulf States vie to buys up British assets.

Andrew Bridgen, the Conservative MP for North West Leicestershire, told the Mail Online that ordinary voters would be shocked to find out that their taxes are funding a government subject to sharia.

“I do find it unbelievable government buildings are governed by sharia law. I don’t see the bars as being an essential part of Parliament but it’s the principle that matters”, he said.

Adding: “Most of our constituents will be absolutely amazed that the principle could ever have been authorised”.