The shocking scenes occurred just moments before a group of around 400 football supporters—calling themselves ‘Casuals Against Terrorism’ from the ‘FCK-Casuals’ hooligan movement—arrived in Place de la Bourse at the centre of Brussels. (Casual is the colloquial term for a European soccer fan).

An eyewitness has now come forward, claiming the small amount of violence was the result of left-wing aggression. He said the Casuals were unfairly labelled Nazis by the media and harshly treated by police, who had given the left-wingers free reign to propagate their politics.

Algerian, Turkish and Kurdish flags also appeared at the shrine while an Israeli flag was trampled on and removed by a woman in a hijab, as reported by Breitbart London.  Large numbers of ‘Refugees Welcome’ and pro-mass migration protesters were spotted, all using the event to further their political ends.

Police did not confront the pro-mass migration agitators and none were ejected from the square, despite booing from the wider crowd and members of the public attempting to intervene.

However, the nationalistic ‘Casuals’ were quickly surrounded and kettled by police, hit with water cannon and pepper spray, then forcibly put on trains and dispersed from the city centre. Ten were arrested. 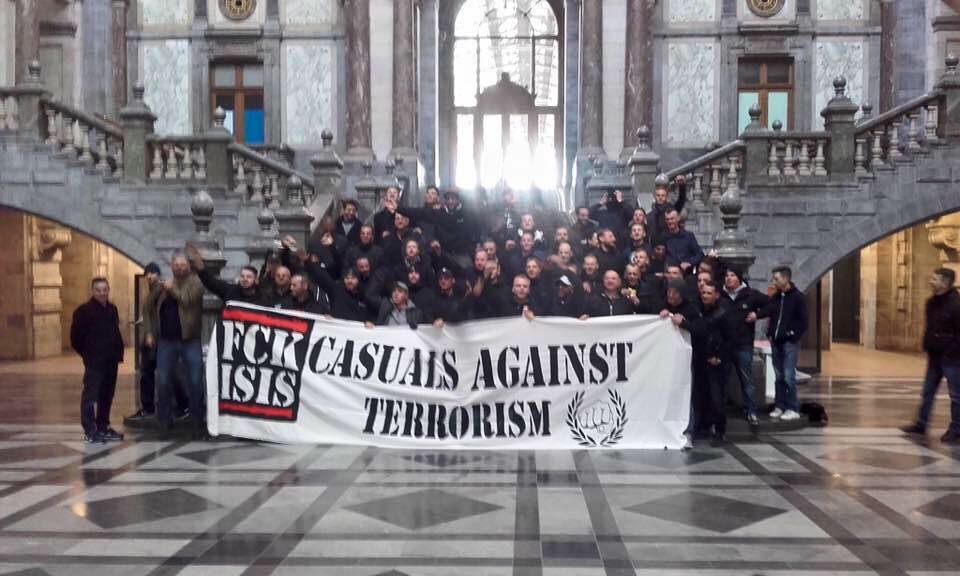 In a statement released on the Facebook page of ‘Dutch Belgium Ultra Hooligan Scene’, a father who attended the memorial with his eight-year-old son described how he was relieved to see the Casuals arrive to counter the left-wing agitators who had hijacked the event.

“What I immediately notice is a particular group on the top right on the stairs… it soon became clear, unfortunately, that they are there to spread their propaganda, in the sense of extreme left-wing ideology.

“I myself am a left-wing person, but can’t stand that people make such a drama and try to use it for their political programme, left or right! I ignore them further”, he wrote.

However, when the Casuals arrived: “It was immediately clear that they had come to mourn. Not to fight, not for “political” positions… The only difference is that these people are dressed in “Sunday” wear [the recognisable clothes of football fans]”, he explained.

Adding: “The silence is broken with loud singing. ‘We hate ISIS’ echoed loud through the streets of Brussels. Many of us who are standing around were impressed to see the spectacle. An old couple right past us starts to clap for them. My little boy did not know what’s going on but look with the open mouth.

“But then all of a sudden the situation changed. A certain person with glasses on, according to me clearly under the influence of drugs, tried to remove the banner that the hooligans were displaying.

“This person is first pushed away slowly, but he once again tried to grab the banner, and then he gets a hit and he falls on the ground. I don’t condone violence, it is never good, but this person has really asked for it.

“But then it starts. The band of left radicals at the top right on the stairs, start to provoke the hooligans and sings songs against them, calling them racists and fascists.”

The father explained how he expected police to intervene and challenge the left-wing faction. However, the police only attacked the Casuals.

Later: “On the radio I hear how the media reports of ‘extreme right-wing’ protesters who turn it upside down. But I myself have seen, that it is not true at all. The provocation clearly came of the extreme left hook”, the witness claimed.

The UK’s state funded national broadcaster, the BBC, has since apologised after falsely reported the group was calling themselves ‘Fascists Against Terrorism’. They also claimed: “Riot police intervened to try to restore order after the group confronted Muslim women in the crowds, made Nazi salutes and chanted”.

The Nazis occupied Belgium during World War Two, and the Casuals have insisted they are against Nazism.

There were indeed a small number of violent incidents, as described by the witness, after the left-wing protesters began chanting “Fascists! Fascists! We’re not having it!” One Casual was filmed punching a “leftist” who ran up to confront them and grab their banner.

One member of the Casuals, called Andres, told AFP news agency: “We are football hooligans, we don’t have anything to do with politics… We are here for the victims and to pay our respects”.

“We don’t believe in candles and flowers. That is for the dead,” said another, who gave his name as Mario and claimed to be in a “hooligan gang” from Ghent.

“We want answers from the government. There are too many fanatics in this country,” he told the Telegraph.

“[The protest] is just a statement to say we love Belgium; Belgium is our country, don’t attack it. And Europe, just leave Europe alone”, explained another.

The Telegraph, the Independent, the Guardian, and the Daily Mail followed the BBC, however, in reporting that the Casuals were “skinheads” and “Nazis”. 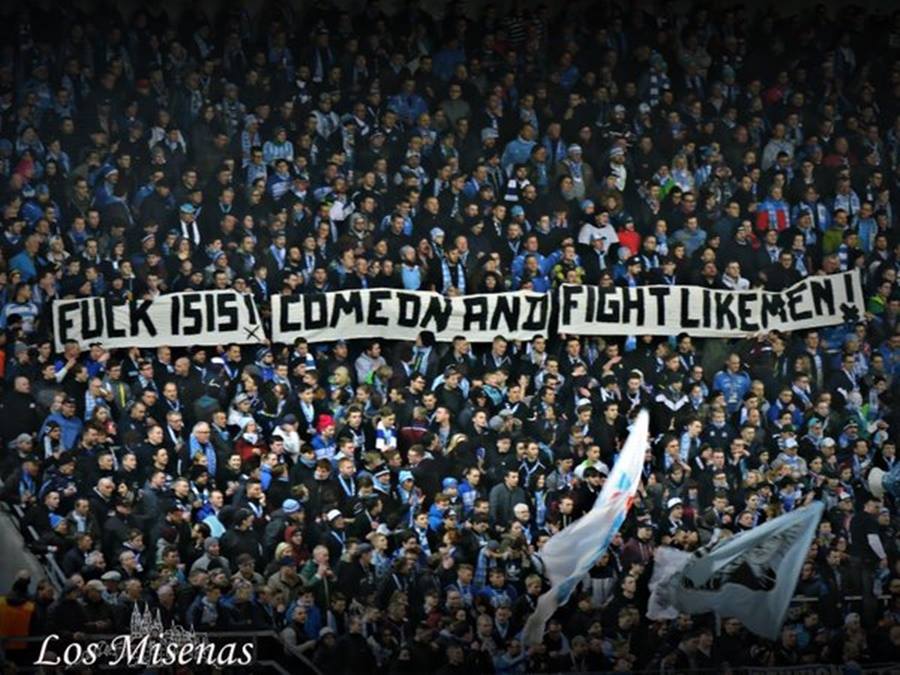 Belgium football supporters have been increasingly vocal in their opposition to radical Islam and Islamic State recently. At a game between Chemnitzer FC and Cottbus on the 23rd of March this year they unfurled a banned which read: “Fuck ISIS! Come on and fight like men!”

A group called Lyon Ultras, from France, were pictured with a similar banner at the beginning of the year, and English fans took to the streets of London to celebrate the ‘evaporation’ Jihadi John in November last year.

Previously, such anti-Islamic State sentiments and protests among football fans were the preserve of Eastern European ‘firms’, most notably those in Poland. As terror comes to the heart of Western Europe, however, so do the protests. 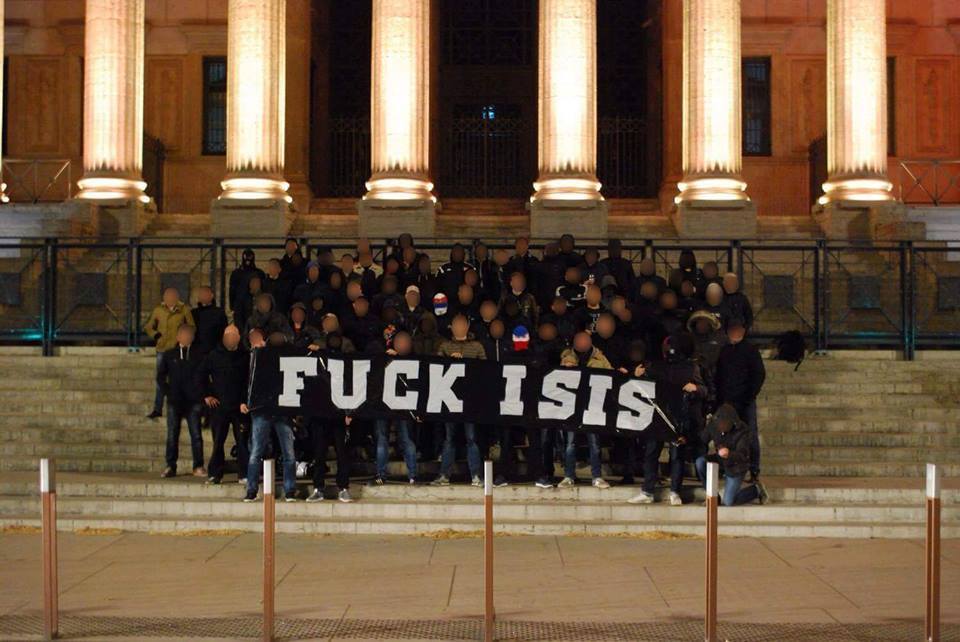