Migrants and left wing, German agitators have been demonstrating the “shameful” European Union (EU) plan to send “irregular” migrants back to Turkey, which came into effect today.

“If they make me go back to Turkey I’ll throw myself and my family into the sea,” Mr. Mustafa, a Syrian waiting with his wife and children at the port of Chios island told Greek news agency ANA. “We went from hell to hell”, he said.

The deportation began this morning, with a group of Pakistani men with little or no chance of being granted asylum in Europe being returned the short distance across the Aegean on a small Ferry. 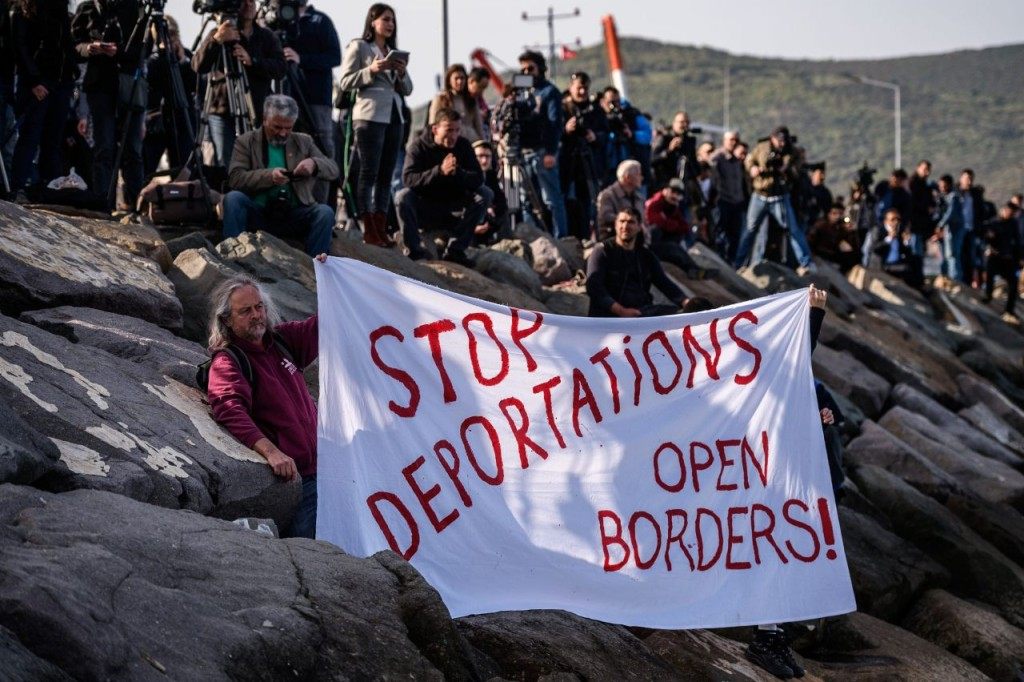 German activists show a banner during the arrival of a small Turkish ferry carrying migrants who are deported to Turkey on April 4, 2016 at the port of Dikili district in Izmir. (OZAN KOSE/AFP/Getty Images)

In the preceding days migrants have repeatedly broken out of the new holding centers on the Greek islands, and some have even threatened to kill themselves if returned to turkey.

Others near the border with Macedonia—which is now firmly closed—have formed human chains to block major roads in protest. 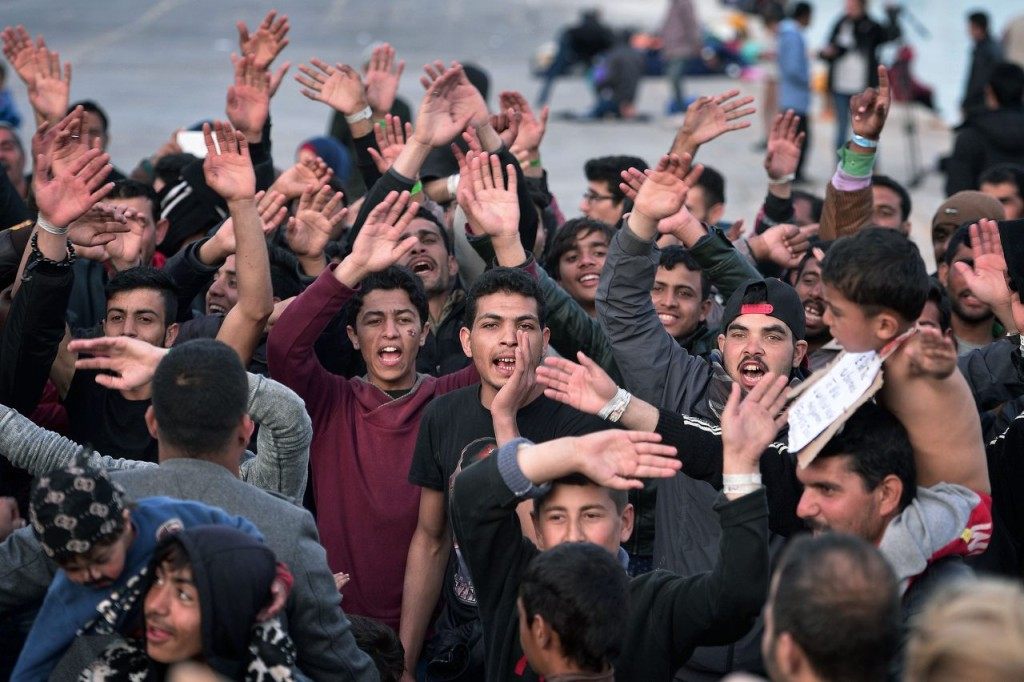 People shout ‘No Turkey’ at the port at the town of Chios where refugees and migrants who broke out from Vial detention center are camped out on April 3, 2016. (Getty) 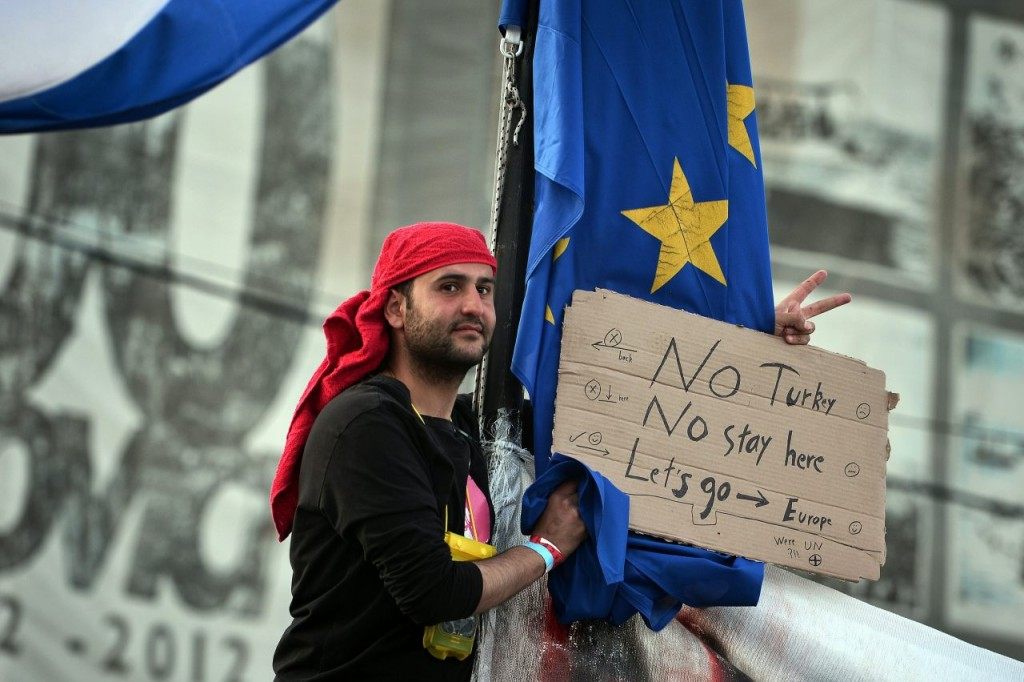 A man holds a placard as he stands next to an EU flag at the port at the town of Chios where refugees and migrants who broke out from Vial detention center are camped out, on April 3, 2016. (LOUISA GOULIAMAKI/AFP/Getty) 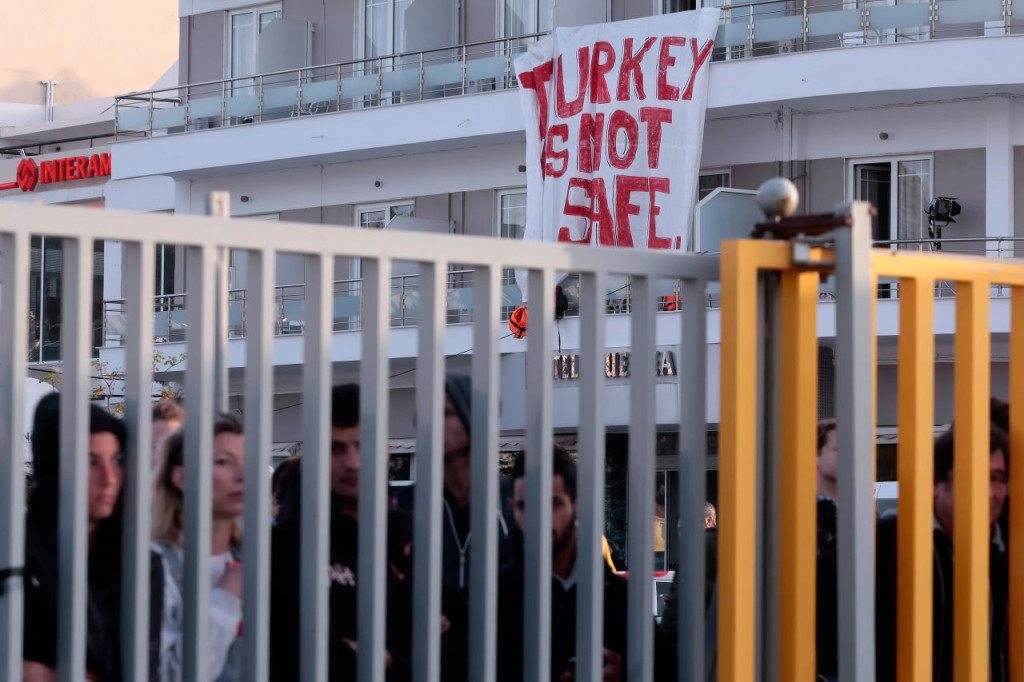 MYTILINI, GREECE – 4 APRIL: A banner “Turkey is not safe” hung by activist during a protest against deportation on 4 April in Mytilini on Lesvos island Greec during a first day of deportation (Getty)

In late March, Ankara and Brussels agreed to close the so-called Balkan route by which over a million migrants traveled through Greece and Macedonia north to the other EU member states during the past year.

According to the agreement, in exchange for financial and political favours Turkey pledged to take back all the illegal migrants who cross into the European Union from its borders.

Brussels will provide 3 billion euros in aid to Ankara for the more than 2 million Syrian refugees residing in Turkey, with the option to increase aid by an additional 3 billion. Turkey also expects an accelerated process of accession to the EU, one of its long-standing goals. 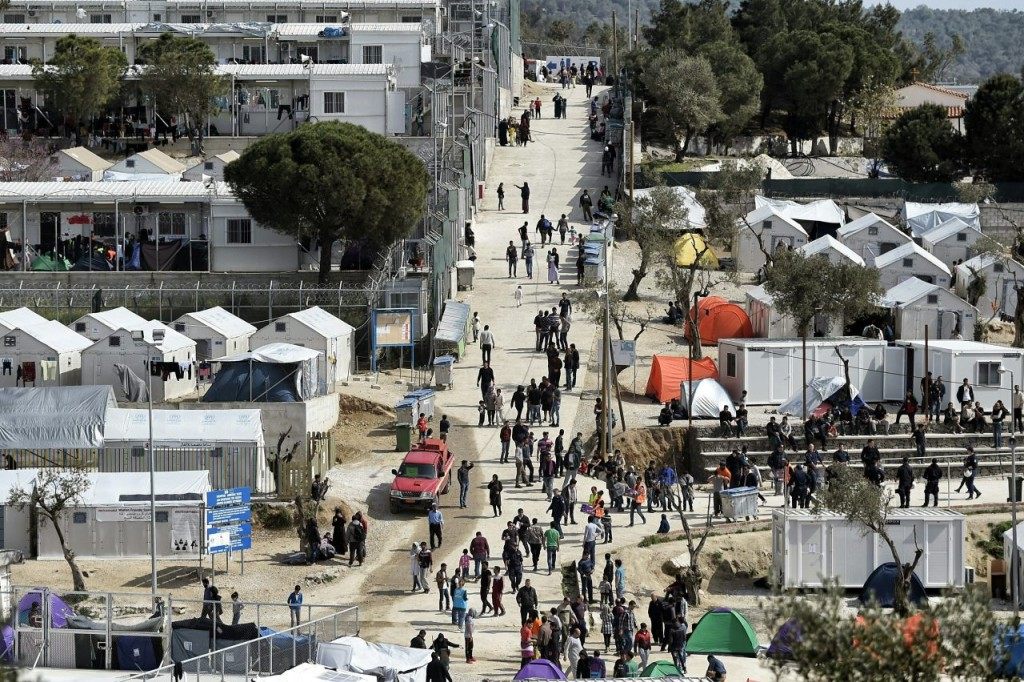 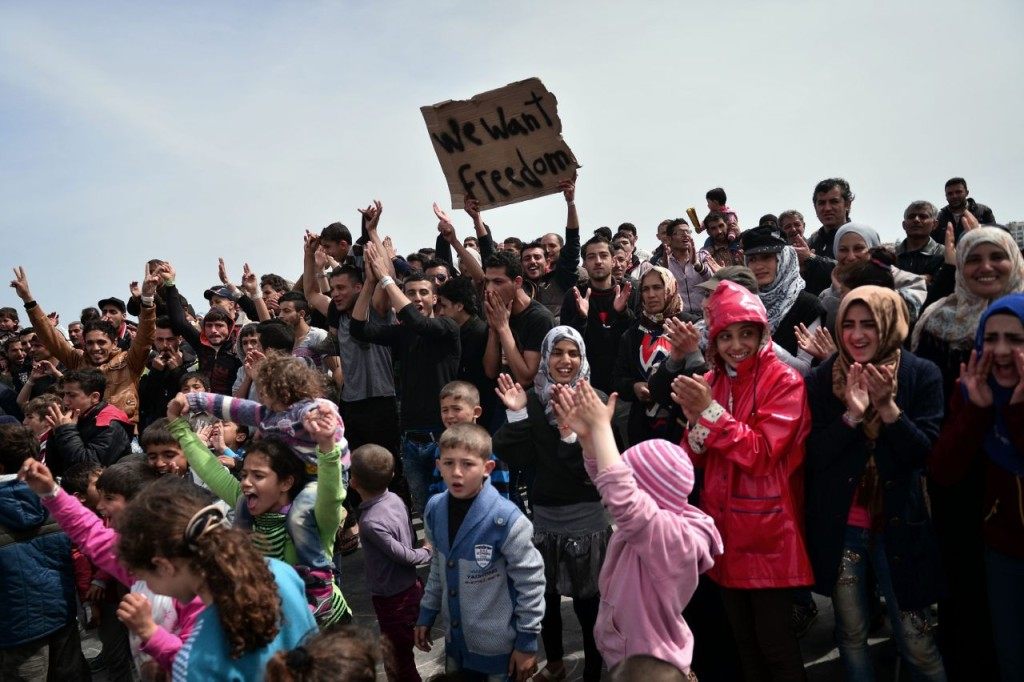 Syrian refugees protest chanting ‘No Turkey, No Vial ( detention center)’ at the port of Chios where refugees and migrants who broke out from Vial detention center camp out on April 3, 2016.

“Collective deportations without having regard to the individual rights of those who claim to be refugees are illegal,” he told BBC radio. “Their rights have to be absolutely protected where they are deported to — in other words Turkey.”

Amnesty International said this week that Turkey was not a “safe country” for refugees, reporting that Ankara was forcing around 100 Syrians to return to their war-torn country every day.

Turkey rejected the criticism, with the foreign ministry saying Saturday “the allegations do not reflect reality in any way”. 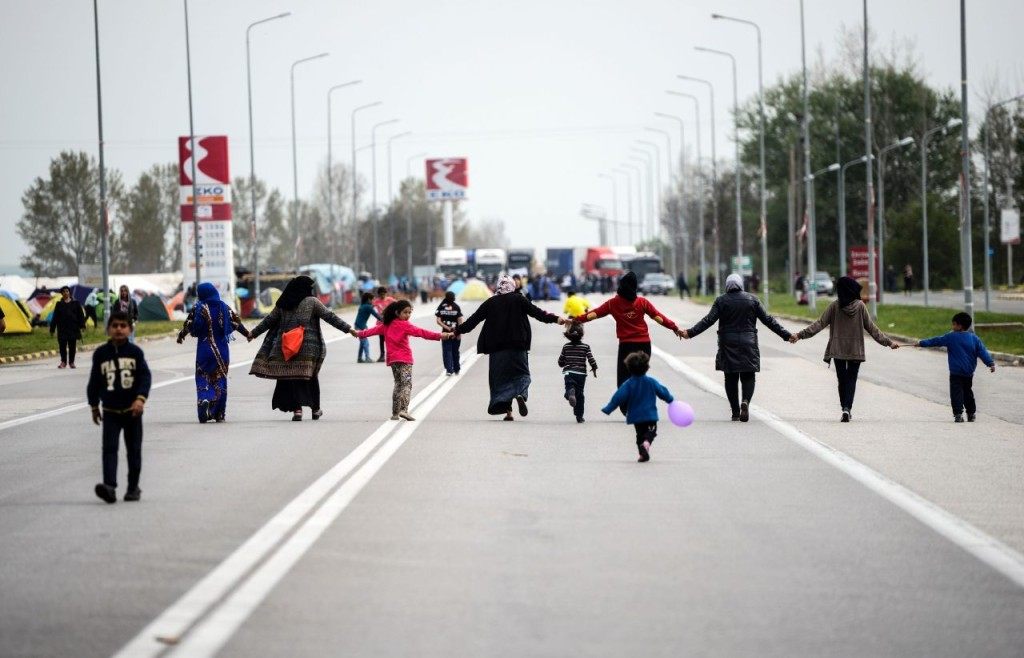 Migrants and refugees hold hands as they block the highway near the town of Polykastro to protest for the opening of the Greek-Macedonian border on April 2, 2016 (BULENT KILIC/AFP/Getty) 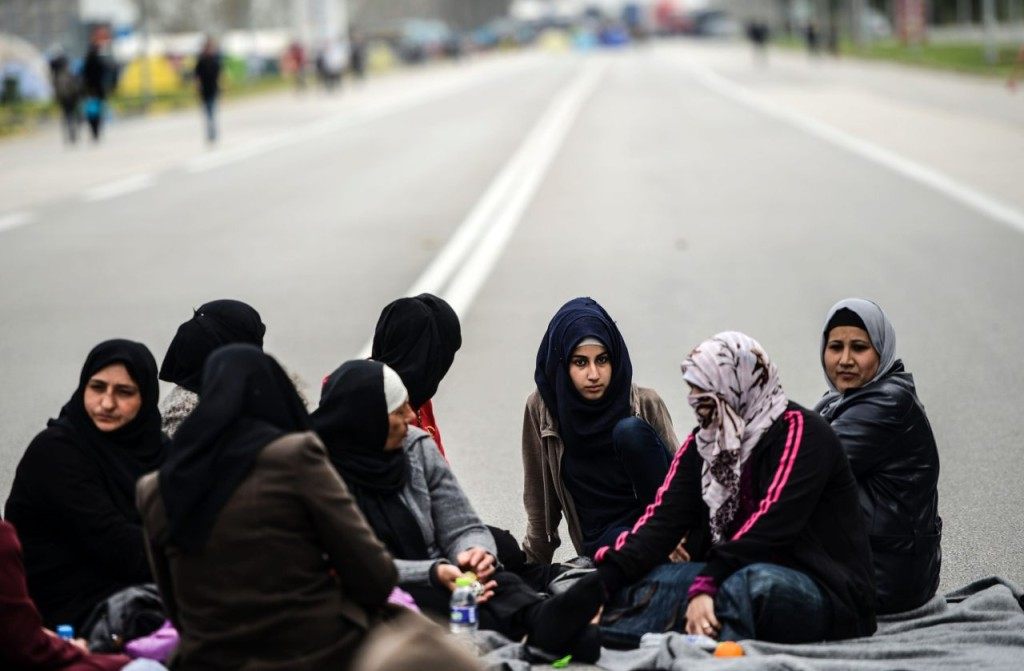 Migrants and refugees block the highway near the town of Polykastro to protest for the opening of the Greek-Macedonian border on April 2, 2016 (BULENT KILIC/AFP/Getty)

Tom Williams contributed to this report