The poster, produced by Operation Black Vote (OBV), was slammed by UKIP leader Nigel Farage as a “disgusting” example of “sectarian politics”.

According to OBV’s own description, “the poster features an Asian woman being berated by an aggressive looking thug” and “aims to empower the [non-white] community to use their voice”.

In February 2015, OBV received an additional £85,000 in funding from the government – which is, of course, desperately campaigning for the UK to remain in the European Union (EU).

Mr. Farage told the BBC that the posters are “sending us down a route of sectarian politics and that’s not good at all”.

Adding: “I’ve supported Operation Black Vote, I’ve been to their events. I’ve spoken up for them. I want to engage all communities to get involved in our democracy. But I’m afraid this advert is a really big mistake.” 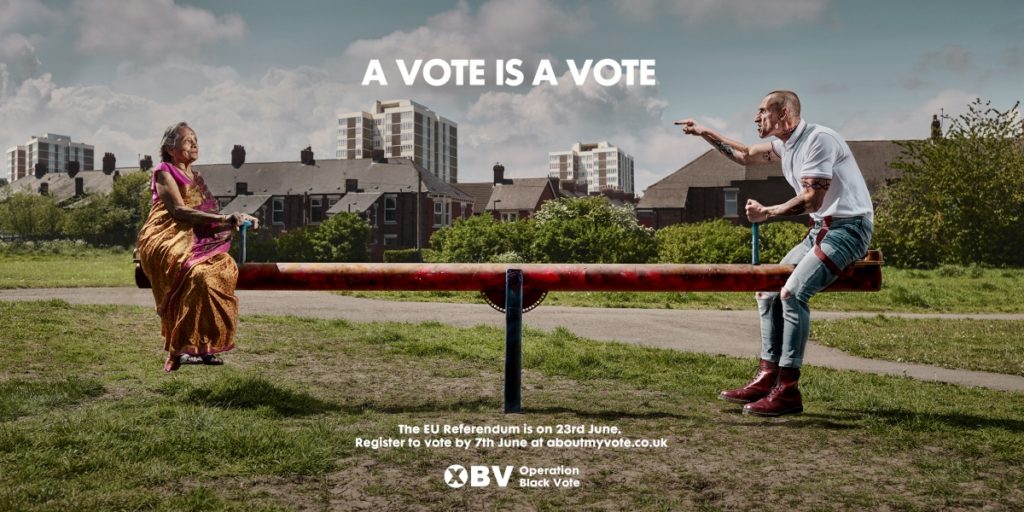 The advertisement was designed by the agency Saatchi and Saatchi. CEO Magnus Djaba said in a statement: “This is a message about democracy, not a message about race. Whichever community you’re from, it hits home.”

The image will go up on poster sites in London and Manchester, and will be accompanied by a social media campaign to “raise awareness” and “provide easily accessible links and guides on how to register”.

There are approximately 4 million non-white voters in the UK, and another 400,000 British Commonwealth voters eligible to vote in the referendum. However, around 30 per cent are not registered to vote, and many of those registered do not make it to the polls.

Simon Woolley, Director of OBV, said: “Perhaps the greatest thing about democracy is that one person’s vote has no more value than another person’s: A vote is a vote.

“With some black and minority ethnic communities still unlikely to be registered to vote, we need to show them that their voices matter.

“These potential voters could easily decide one of the biggest questions of the last three decades — whether we remain in the EU or leave.”