UPDATE: The BBC reports the death toll is now more than 120 dead.

BAGHDAD (AP) — At least 91 people were killed Sunday in two bombings in the Iraqi capital, including a large-scale attack claimed by the Islamic State group that killed 86 people — among them 15 children — in a central shopping district, officials said.

The bombings demonstrated the extremists’ ability to mount significant attacks despite major battlefield losses, including the city of Fallujah, which was declared “fully liberated” from IS just over a week ago.

The deadliest attack took place in the central Karada district of Baghdad, where a suicide bomber blew up his explosives-laded pickup truck outside a crowded shopping center, killing at least 86 people and wounding up to 170 others, according to a police officer. He said the dead included 15 children, 10 women and six policemen. 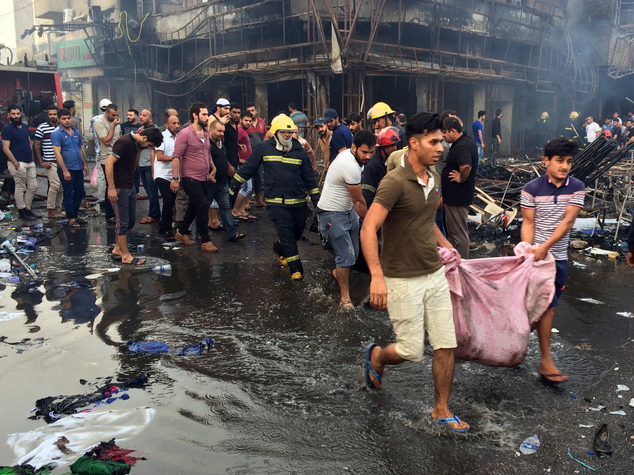 The suicide bomber struck shortly after midnight, when families and young people were out on the streets after breaking their daylight fast for the holy month of Ramadan. Most of the victims were inside a multi-story shopping and amusement mall, where dozens burned to death or suffocated, officials said.

“It was like an earthquake,” said Karim Sami, a 35-year-old street vendor. “I wrapped up my goods and was heading home when I saw a fire ball with a thunderous bombing. I was so scared to go back and started to make phone calls to my friends, but none answered,” the father of three added. He said that one of his friends had been killed, another was wounded and one was still missing.

Within hours, IS claimed responsibility for the bombing in a statement posted online, saying they had deliberately targeted Shiite Muslims. The Associated Press could not verify the authenticity of the statement, but it was posted on a militant website commonly used by the extremists.

At the scene, firefighters and civilians were seen carrying the dead away, their bodies wrapped in blankets and sheets. Smoke billowed from the shopping center, which was surrounded by the twisted and burned wreckage of cars and market stalls. A group of women were sitting on the pavement, crying for their loved ones. 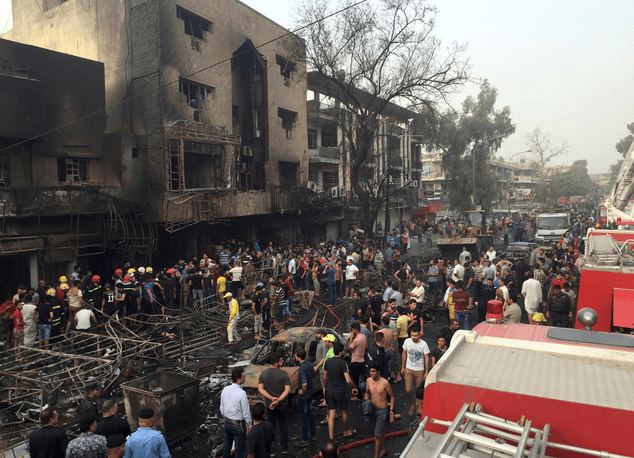 In the second attack, an improvised explosive device went off in Baghdad’s northern Shaab area, killing 5 people and wounding 16, another police officer said. No group claimed responsibility for the attack, but it bore the hallmarks of IS militants who often target commercial districts and Shiite areas.

Medical officials confirmed the casualty figures. All officials spoke anonymously because they were not authorized to release information to the press.

The high death toll made it the second deadliest attack in the capital this year. On May 11, IS militants carried out three car bombings in Baghdad, killing 93 people.

Hours after the bombing, Iraqi Prime Minister Haider al-Abadi and lawmakers visited the blast site. Video footage uploaded to social media showed an angry crowd, with people calling al-Abadi a “thief” and shouting at his convoy. Eyewitness said the crowd pelted the al-Abadi’s car with rocks, shoes and jerry cans. 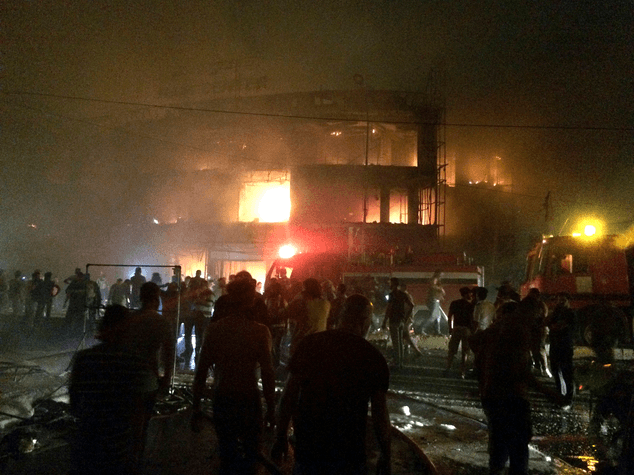 Until the government launched its Fallujah operation, the prime minister had faced growing social unrest and anti-government protests sparked, in part, by popular anger at the lack of security in the capital. In one month, Baghdad’s highly-fortified Green Zone — which houses government buildings and diplomatic missions — was stormed twice by anti-government protesters.

In Karada civilians expressed their frustration at the government’s failure to secure the capital.

“We are in a state of war, and these places are targeted. The security can’t focus on the war (against IS) and forget Baghdad,” Sami, the street vendor, said.

IS still controls Iraq’s second largest city of Mosul as well as significant patches of territory in the country’s north and west.

At the height of the extremist group’s power in 2014, IS rendered nearly a third of the country out of government control. Now, the militants are estimated to control only 14 percent of Iraqi territory, according to the office of Iraq’s prime minister.