Mr. Farage – who led his party (UKIP) to victory in the 2014 European Parliamentary elections, to a whopping 4m votes in the 2015 UK general election, and mostly importantly, to Britain voting to leave the European Union in 2016 – has used the “People’s Army” moniker to describe his party’s supporters for years.

Introduced by Republican Party presidential candidate Donald Trump, he told the crowd that UKIP and Brexit campaigners had defeated the UK political establishment including the big banks, the corporations, the political classes, the pollsters, and the “liberal elite” by talking to people about controlling their country, their borders, and having self-respect for themselves.

He hit out at U.S. President Barack Obama, who visited Britain during the campaign and threatened to send the country “to the back of the queue” for a trade deal with the United States if Britain voted for Brexit.

Mr. Farage has previously called Mr. Obama “despicable” and said he refused to repeat his behaviour by telling Americans how to vote.

The crowd, massively receptive to Mr. Farage’s comments, cheered repeatedly when he mentioned how they too could defeat the political status quo. 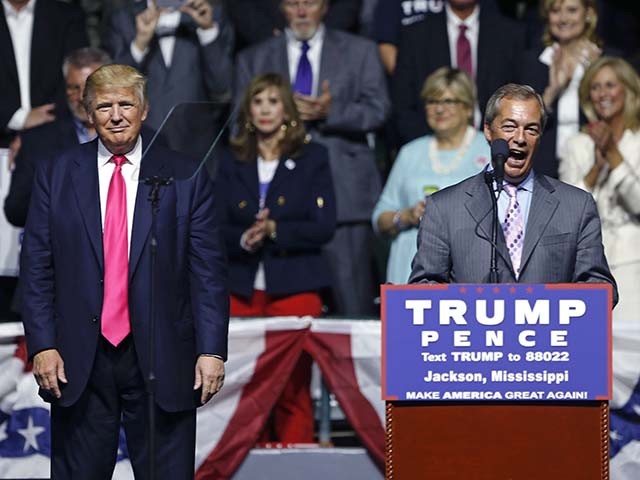 Breitbart London understands that Mr. Farage met Mr. Trump at a fundraising dinner earlier in the evening, where they discussed Brexit and how Mr. Farage led Britain out of the European Union.

And Mr. Farage mentioned “Project Fear” – the tactic used by the establishment to threaten Britons with economic collapse, with depression, and even with war if Britain left the EU.

Mr. Trump hailed Mr. Farage as the man behind the Brexit campaign, stating after his speech, “What a job he did… against all odds”.

UPDATE – Editor’s Note: Farage’s speech has caught the attention of the Huffington Post, which set its home page lead to a picture of him and Trump with the headline “Bannon’s Bigots” — a reference to Stephen K. Bannon, the temporarily departed Executive Chairman of Breitbart News who currently serves as CEO to the Trump campaign. The story linked to the headline does not mention Bannon; he must really be in their heads over there!