The Women’s Officer at the University of York has labelled students “dangerously naive” after they protested the institution first ever sexual consent classes, walking out en mass as they felt “patronised”.

However, around a quarter of the 5,000 youngsters summoned defiantly decided to leave the event, arguing that they did not need the lecture or wish to be framed as “potential rapists” by the feminist Women’s Officer.

“We’re Women’s Officers at the University of York. Earlier this year, we were elected after a cross-campus ballot in which we pledged to run consent talks. On Tuesday 27 September, we did just that”, wrote furious Student Union official Lucy Robinson, responding to the protest.

“If you’ve eaten a lasagne, would you automatically consider yourself an expert on Italian cuisine? Probably not. So why then, do we assume that 18-year-olds are experts on sexual consent, just because a number of them will have had sexual experiences?” she argued.

Third-year activist Ben Froughi did not agree. He distributed flyers outside the event, informing students that they had no obligation to sit through the classes, and encouraging them to take a stand.

“When handing out the flyers to the final group of the day, one fresher stood beside me and shouted towards the group waiting to enter, ‘We don’t consent to consent talks!’ which got a laugh,” Mr. Froughi told York’s student paper Nouse. 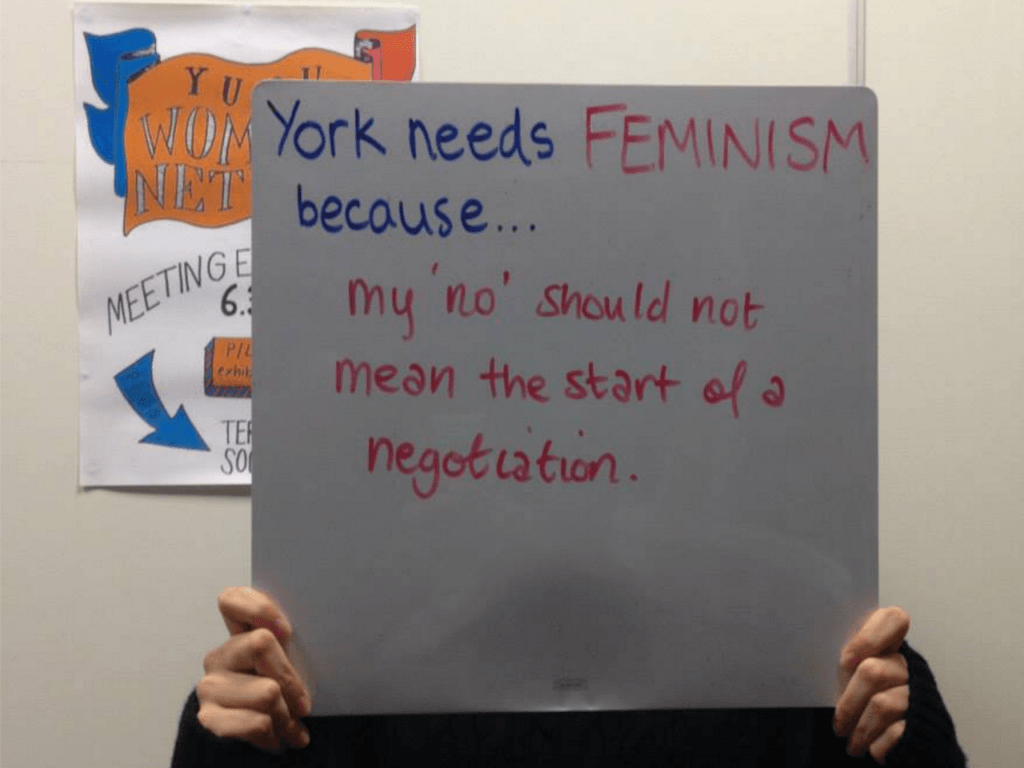 “Consent talks are patronising; if students really need lessons in how to say yes or no then they should not be at university”, he argued.

“There is no ‘correct’ way to negotiate getting someone into bed with you. In suggesting that there is consent talks, perhaps most damaging of all, encourage women to interpret sexual experiences that have not been preceded by a lengthy, formal and sober contractual discussion as rape.

“Consent talks propagate the backward message that all women are potential victims and all men potential rapists”, he said.

However, the National Union of Students (NUS) guidelines state that universities have a duty to tell freshers the legal definitions of rape and sexual assault, citing wolf-whistles, heckling and jokes about rape as common examples of harassment.

The NUS commissioned a report in 2014 claiming that one in five students will experience some form of sexual harassment during their first week of term.

The stats were widely discredited, however, when it was revealed that “unwanted sexual advances”, such as asking a girl to dance, were classed as harassment.

York’s feminist Student Union has hit the headlines before after they banned events marking International Men’s Day less than 24 hours after a male student at the University killed himself.

Around 200 staff, students and alumni described the idea of “equality for everyone” as “misogynistic rhetoric” and argued that a Men’s day was wrong “because women are structurally unequal to men”.