The latest UN climate summit – COP22 in Marrakech, Morocco this time – has been tragically overshadowed by the dark cloud of Donald Trump’s victory.

Delegates are trying to put a brave face on it, according to this tear-by-bitter-tear live update from the summit:

The reaction from the NGO community to Trump’s victory has been tightly coordinated, professional and constructive. They pivoted swiftly from stressing the significance of the choice between the two candidates for the climate, to downplaying Trump’s ability to derail the great green economic shift.

But it has thrown negotiations into turmoil – for the US team at least because they now know they’re toast:

Spare a thought for the US negotiators right now. Technically, they still answer to the Obama administration, but they cannot promise anything Trump’s people would overturn.

This is the team that worked closely with China to make build consensus for the Paris Agreement and get it ratified early. They will soon be out of a job, watching from the sidelines as the new administration attacks that progress.

Many tears are being shed, possibly contributing dangerously to global sea-level rise.

“I’m 18 years old and voted for the first time for Hillary Clinton a few days before I left for COP. My heart is absolutely broken at the election of Trump. I have a president who no longer values who I am as a young woman or the child of immigrants,” said Becky Chung, SustainUS delegate from Buena Park, California.

To add to the greenies’ misery, coal stocks have risen: 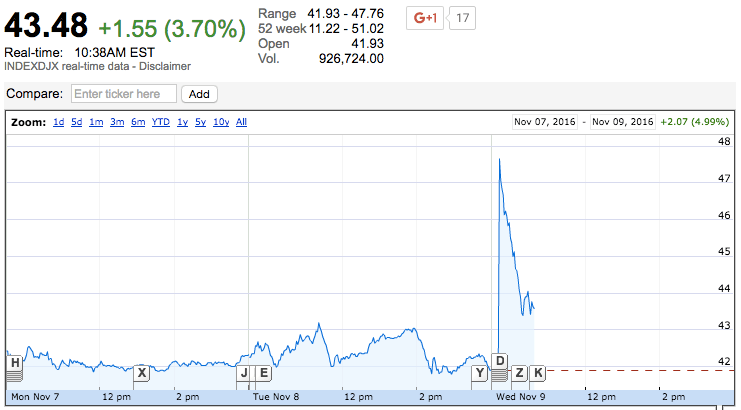 While renewable stocks have plummeted. One of the many victims of Trump’s victim is Vestas, the world’s largest manufacturer of wind turbines. At one point their stock had fallen by as much as 14 per cent.

According to an Ernst & Young LLP survey published last month, the U.S. stands to lose its position as the top-ranked renewable-energy market for investors under a Trump administration.

Trump has made clear “he hates wind turbines and will do what he can to fight them,” Jacob Pedersen, head of equity analysis at Sydbank, said earlier this month.

Yep. Trump really hates wind turbines. This presidency is going to be fun.