A British Islamist, who brutally murdered a fellow Muslim for “disrespecting Islam”, has allegedly called for his growing international following to “eliminate” enemies of Islam from his cell in Scotland.

In August last year, Tanveer Ahmed was jailed for 27 years after driving more than 200 miles from Bradford to Glasgow to murder Asad Shah – who he targeted for being a member of Ahmadi sect and for wishing his “beloved Christian nation” a Happy Easter.

Ahmadi Muslims are a peaceful, pro-Western group who are persecuted around the world and officially classed as apostates in their native Pakistan.

Killers of Ahmadi Muslims and proponents of blasphemy executions have become cult figures in Pakistan, and some Muslims have celebrated Tanveer Ahmed since his prosecution in the UK.

Now, in a telephone interview posted on the Facebook page of hardline Pakistani cleric Khadim Hussain Rizvi, conducted in Urdu, Mr. Ahmed called for more bloodshed in the name of Islam. 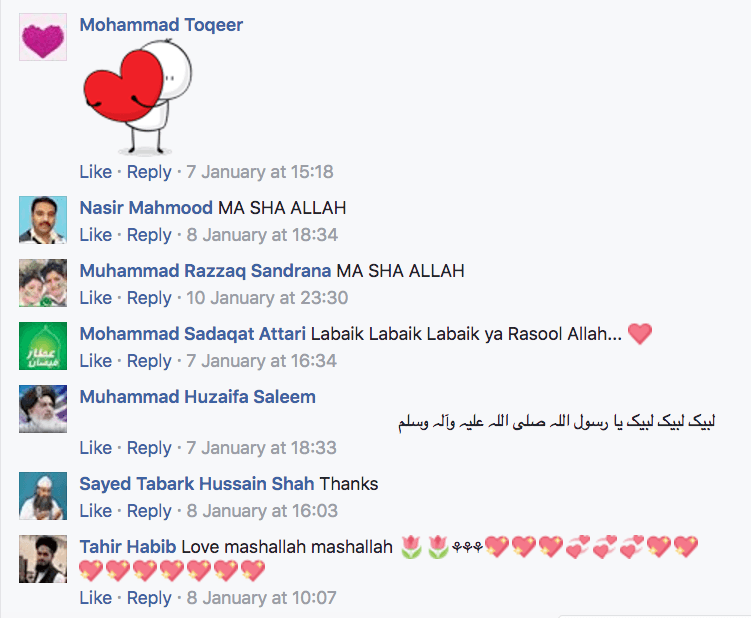 Comments below the video on the Facebook page of cleric Khadim Hussain Rizvi.

“Anyone who disregards the respect and honor of Ghazi [Islamic holy warrior] Mumtaz Qadri, he is the one who announces his enmity with Islam openly,” he says in the recording dated 7 January, translated by the IBTimes.

“Whoever calls the martyr (Qadri) an assassin, he is vicious, unclean and false. Our Ghazi (Qadri) has done a great job, and uplifted the flag of Islam,” says Mr. Ahmed in the 10-minute recording.

“Satan Taseer was a transgressor and sinful. And all of his supporters are also infidels. Anyone, who has sympathy [for] him, be remembered, he shall have a painful death,” he adds.

Then, chillingly, he urged his followers to “eliminate all of the enemies of Islam and uplift the flag of Islam”.

Interviewer Khadim Hussain Rizvi is a leading member of the Khatme Nubuwwat movement, which exists to eliminate the Ahmadi sect, and formerly had their UK headquarters at the Stockwell Green Mosque in London.

Until April 2016, the Muslim Council of Britain (MBC), the UK’s largest Muslim umbrella group, was officially affiliated to the mosque, which has been investigated by the Charity Commission for promoting the killing of Ahmadi Muslims.

Despite “temporarily” disaffiliating from the mosque, the MCB continues to class Ahmadis as “apostates” and “infidels” (an accusation punishable by death in much of the Muslim world).

The council also appointed an imam who has supported Khatme Nabuwat and believes apostates should be killed to investigate the hate group.