Thousands have gathered at a so-called “Stand Up to Trump, Stand Up to Racism” protest at the U.S. Embassy in London, with organisers promising to help Americans “overthrow” the new President and “send him back” to the U.S. if he comes to the UK.

Speaker at the demonstration organised by Stand up to Racism, a group linked to Britain’s disgraced Socialist Workers Party (SWP), also called for “open borders” and for “right-wing reactionaries” from around the world to be opposed.

Around 50 prominent Members of Parliament, the house of Lords, trade unionists supported the demonstration, and similar protests were  held in 20 towns and cities across Britain, including Birmingham, Cardiff, Glasgow, Leeds, Manchester, and Southampton. 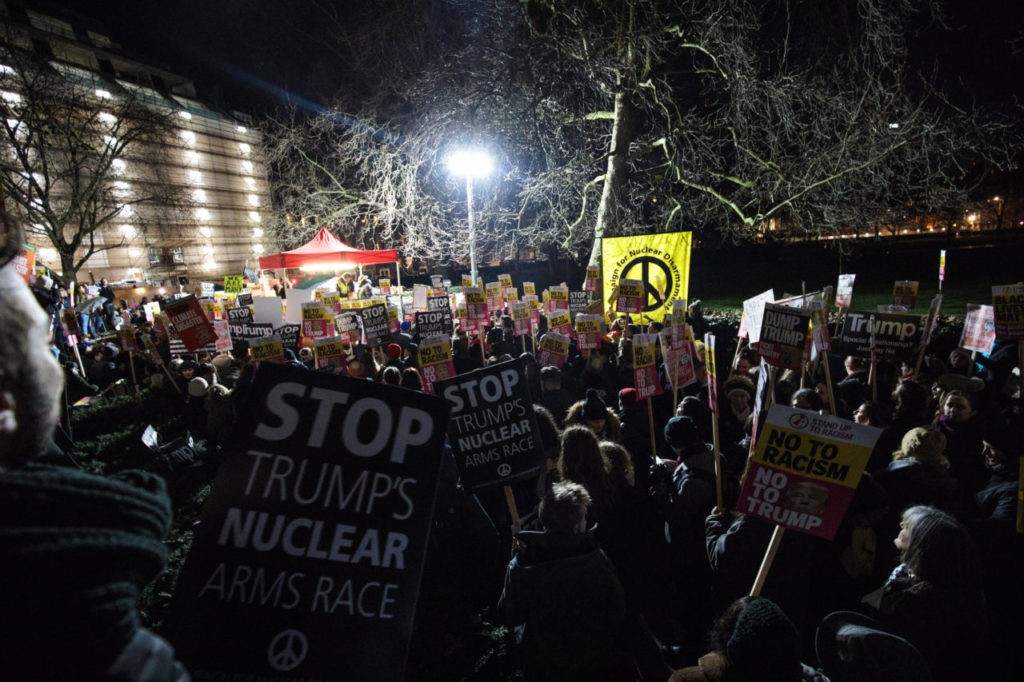 “I think it was George Soros who said last night that [Mr. Trump] is a ‘would-be dictator’, and we will fight him along with the majority of Americans who didn’t vote for him”, said Steve Heart, the vice-chair of Stand up to Racism, to loud applause.

“We’re also here to stand up to racists. Because we know… that it is racists and literally Nazis who called themselves the ‘Alt-Right’ who support Trump”, he said.

He also denounced right-wing leaders from around the world – including Marine Le Pen of France and Geert Wilders from the Netherlands – who were “emboldened” by Mr. Trump’s victory and must be “destroyed”. 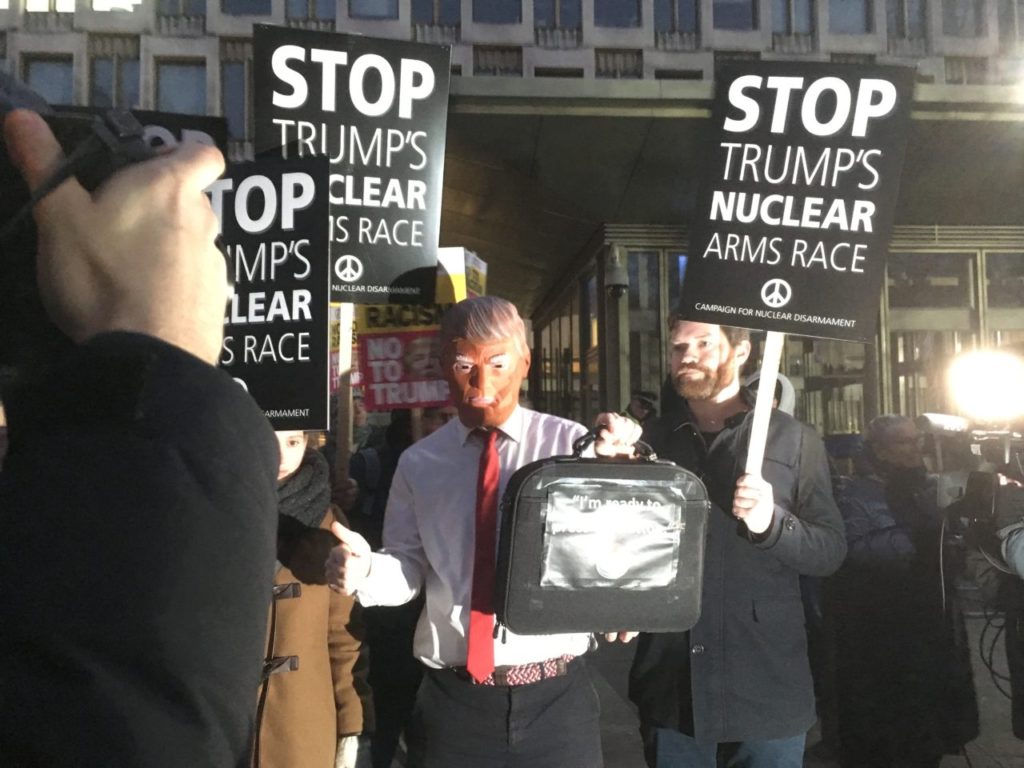 Weyman Bennett of the SWP told the crowd he was “sick when I saw the three scumbags had met”, referring to Mr. Trump, UKIP leader Nigel Farage and Leave.EU founder Aaron Banks.

“We demand open borders”, he said, addressing the issue of Brexit. “Everyone has the same rights and the same right to live where they want”, he claimed, before link Brexit to Trump’s victory and describing the votes as “racist”.

Another speaker linked President Trump’s victory to the KKK, and said his election and “appointment of such a right-wing, reactionary, bigoted team of advisers… including Steve Bannon” was a “victory for white supremacy.” 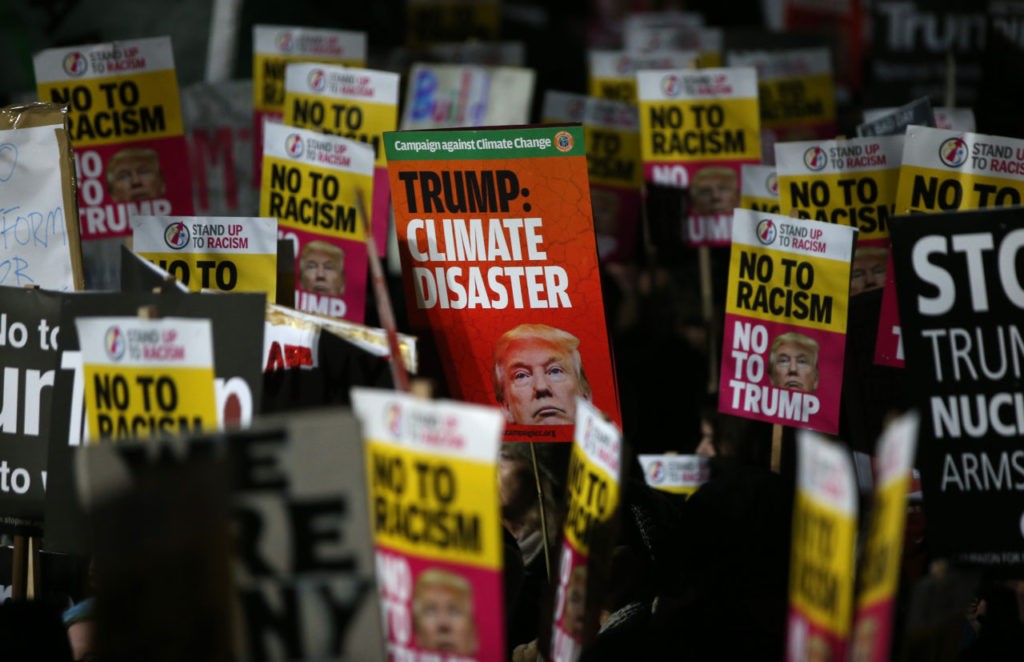 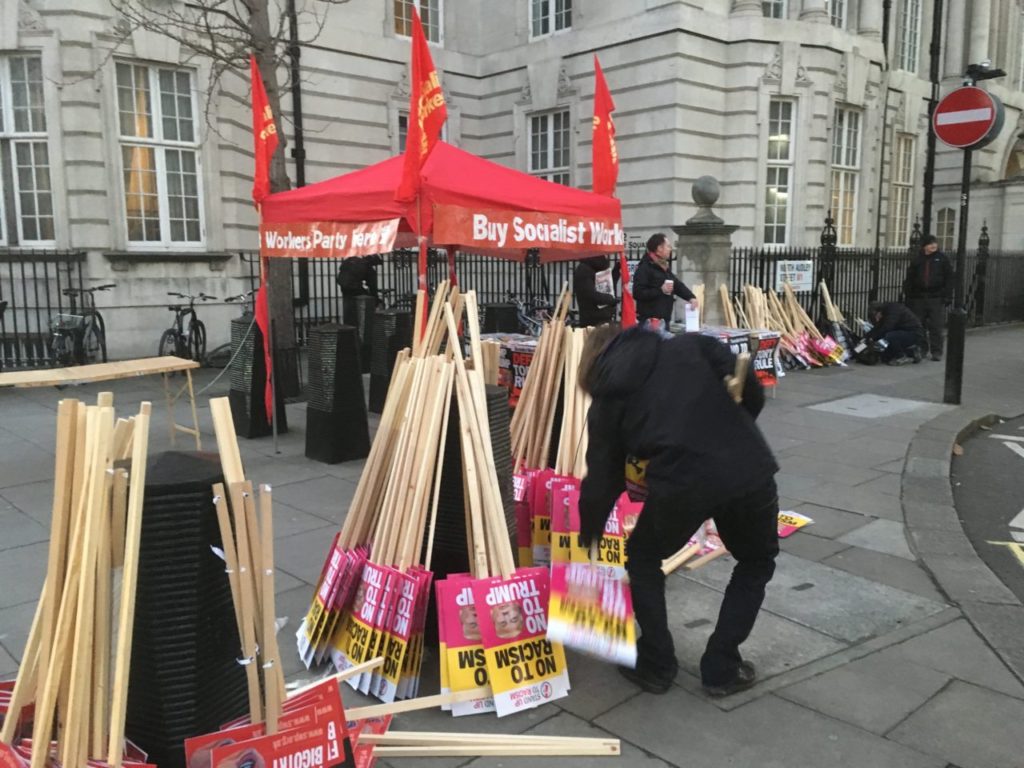 On Facebook the organisers claimed “the effects of a Trump presidency is set to be felt all over the world as racism, sexism, homophobia and bigotry is normalised through the voice of one of the most powerful and visible figures in the world, and progress on C02 emissions targets dashed as one of the world’s largest emitters refuses to accept there is a problem.

“Activists in the US have called protests for the day of his inauguration – we stand in solidarity with them and will be protesting at the US embassy in London”, they wrote. 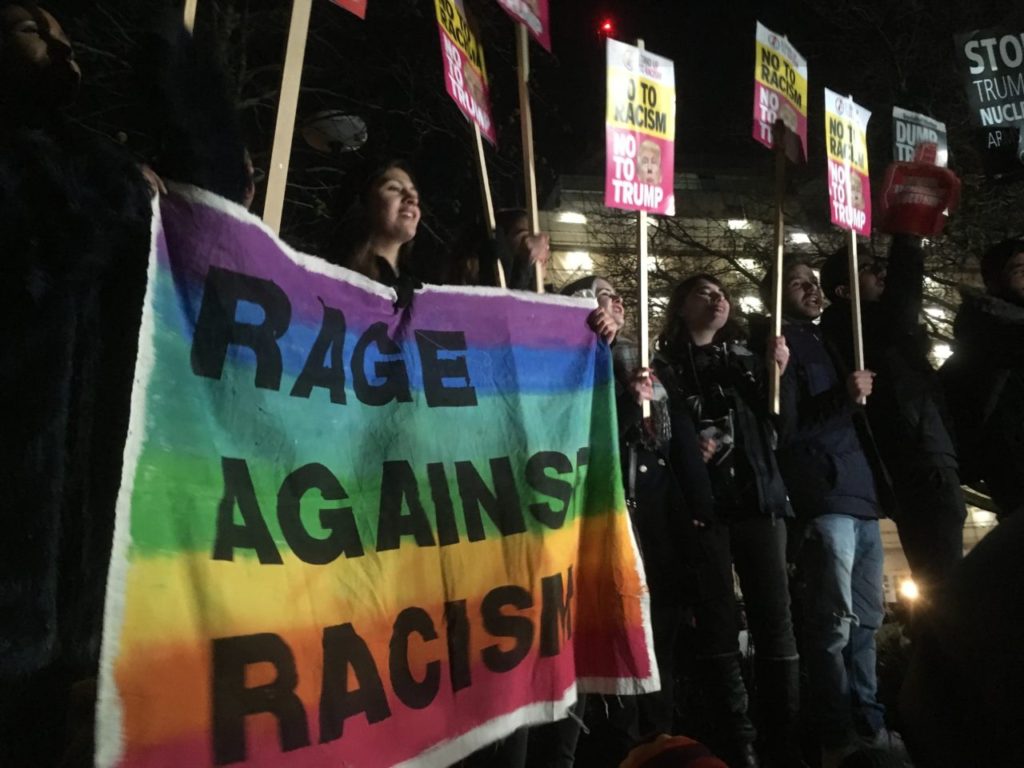 The letter reads: “The election of Donald Trump is deeply disturbing and a stark warning to us all. Every right-wing figure and organisation is rejoicing at the prospect of President Trump. 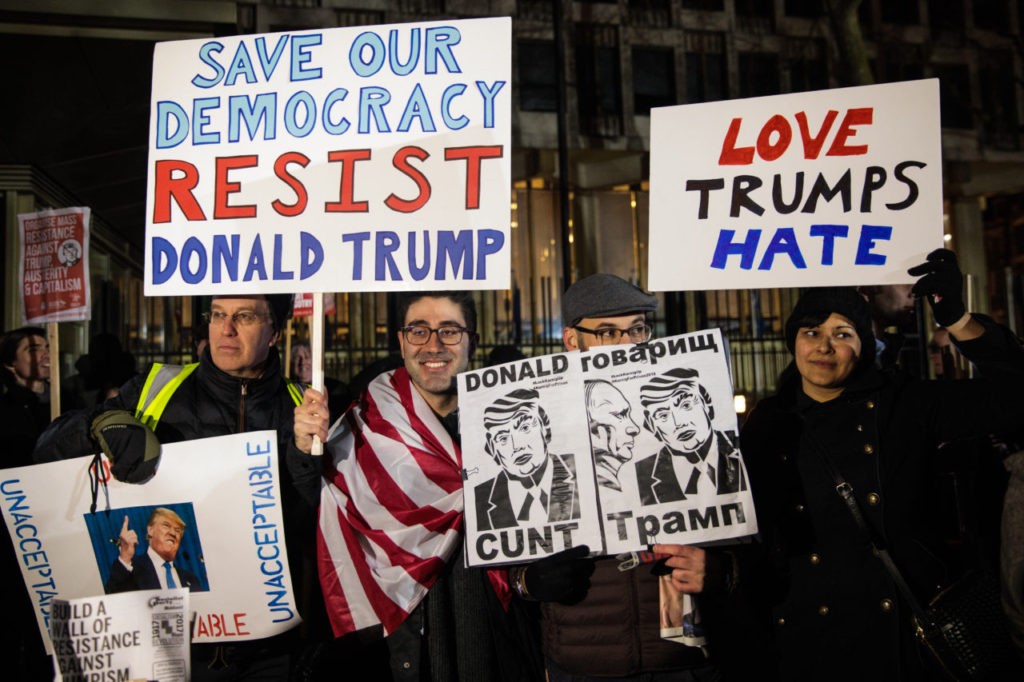 “The shameful list stretches from Marine le Pen and the Front National in France, Geert Wilders in Holland, Norbert Hofer in Austria, right-wing leaders in Poland and Hungary to most of the Republican Party and the Ku Klux Klan.

“In Britain, Nigel Farage and UKIP are at the head of the Trump bandwagon supported by sections of the Tory Party. Racism – whether Islamophobia, or antis-semitism, relentless scapegoating of migrants and refugees, the disregard for black lives or shockingly, blatant belief in white supremacy – is growing significantly. Racial attacks and other hate crimes are worryingly on the rise.” 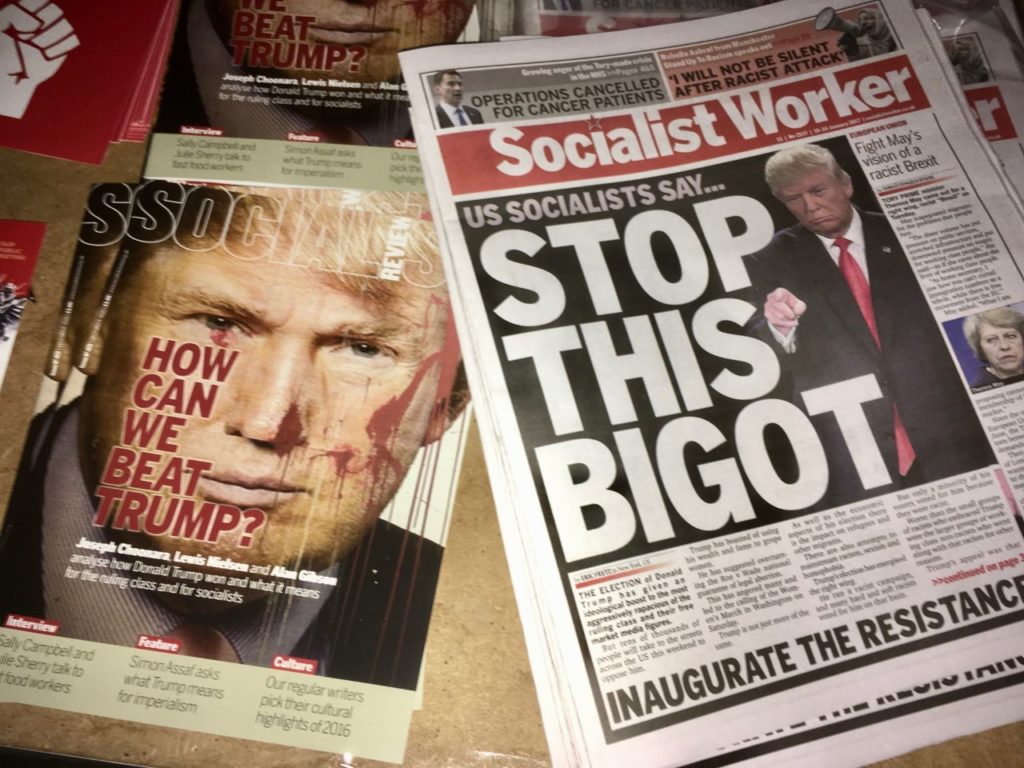 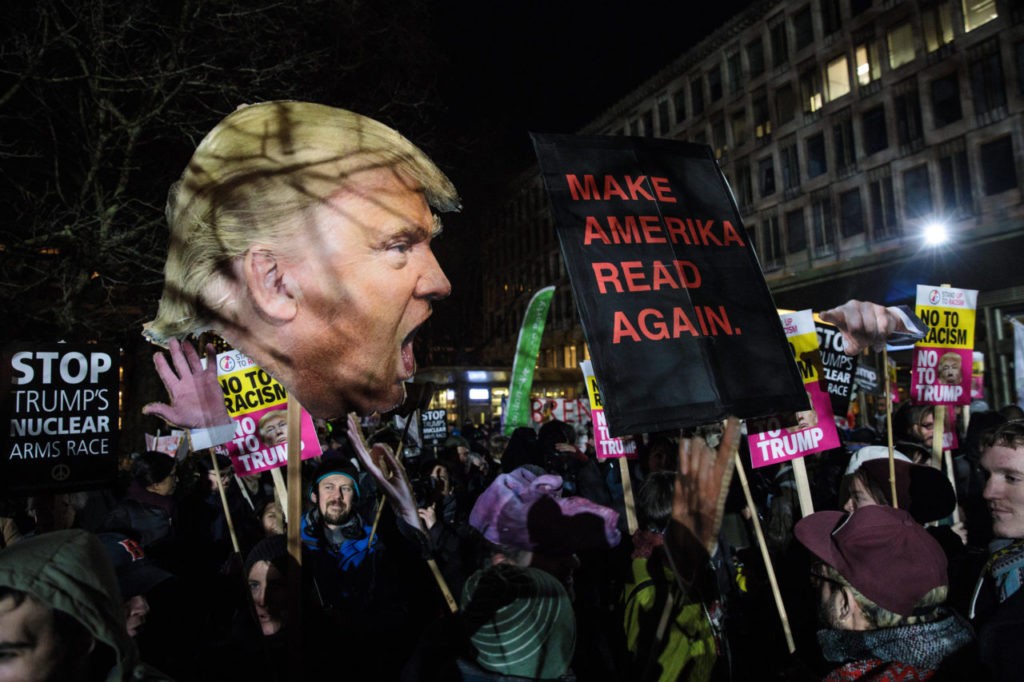