Pro-European Union publication the New European has accidentally emailed out plans to “stir up controversy” in the town of Skegness, which voted heavily for Brexit.

In a press release erroneously sent to journalists, the weekly paper revealed its latest cover story, with the text:

“The cover story – Skegness: The seaside town that Brexit could close down; this is unlikely to go down well, locally, and there is an opportunity to stir up some controversy locally – worth sending the cover and the story to local television and newspapers (as I don’t suppose we sell many copies there).”

The paper then sent a second message recalling the press release, while a new version of the release omitted most the offending text.

The front cover lampoons the “jolly fisherman” poster, created in 1908, that has become a symbol of the town, promoting it as a tourist resort. 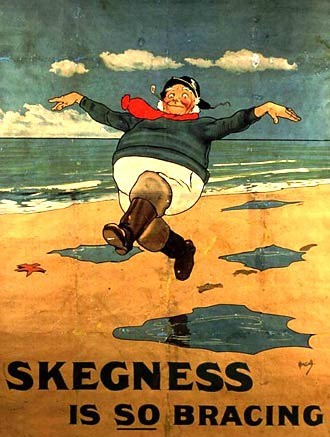 The cover instead depicts him with an evil clown face, giving a two finger salute while wearing a jumper reading “go away” and scarf with the UKIP colours.

The headline reads “Skegness is SO Brexit”, with the strapline: “Anthony Clavane visits the seaside to see if they still love Leave.”

The town is part of the East Lindsey district, which voted by 70.65 per cent to leave the European Union in last year’s referendum, making it one of the most pro-Brexit areas of the UK.

This is not the first time the paper has caused controversy. In January, Cambridge professor Nicholas Boyle branded the people who voted for Brexit as “lager louts” and “ruffians” in an article for the paper.

“Like resentful ruffians uprooting the new trees in the park and trashing the new play area, 17 million English, the lager louts of Europe, voted for Brexit in an act of geopolitical vandalism,” he wrote.