The conservative group, who were responsible for mass protests of hundreds of thousands against gay marriage in 2013, released a statement saying that Macron is an “openly anti-family candidate” and told their supporters not to vote for him.

While the group did not openly endorse his rival, anti-mass migration candidate Marine Le Pen, president of La Manif pour Tous Ludovine de La Rochère said: “For families, for children, for the future, May 7: Macron no!”

The group said that a victory for Macron would mean a “civilizational upheaval” and create “new injustices and inequalities for women and children”.

During the first round of the election, the group was largely attached to conservative Republican candidate François Fillon through the association Common Sense. Though as recently as 2016, Front National firebrand Marion Maréchal-Le Pen took part in their protests against anti-family policies. 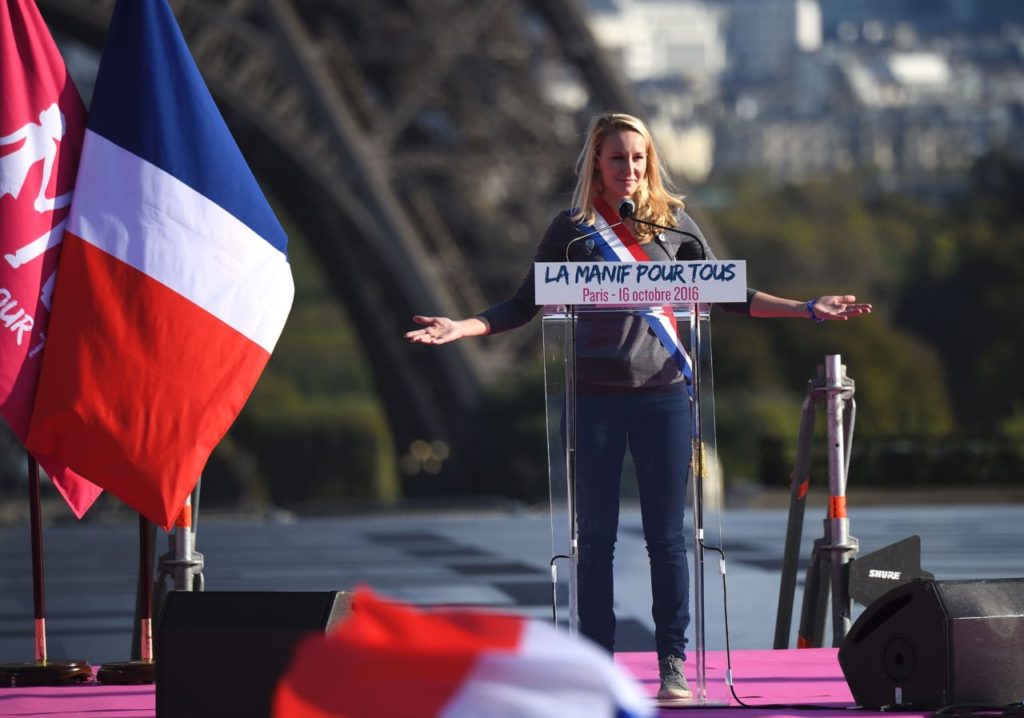 Since its formation in 2012, the group has been active around three main policy issues, opposition to gay marriage, gay adoption, and so-called gender theory.

Whilst the group is entirely opposed to gay marriage, many are divided on the subject of civil unions. As part of her campaign platform, Marine Le Pen has called on France to adopt civil unions for homosexual couples rather than gay marriage which she would abolish.

Despite promising to abolish gay marriage, Le Pen has seen a rapid rise in the number of supporters from the LGBT community as many are more worried about Islamic extremism and security concerns.

Gay artist Kelvin Hopper described why he intends to vote Le Pen saying: “Faced with the current threats, particularly from radical Islam, gays have realised they’ll be the first victims of these barbarians, and only Marine is proposing radical solutions.”

Currently, Marine Le Pen needs to attract former Fillon voters like the supporters of La Manif pour Tous in order to beat Emmanuel Macron on 7 May as recent polls show him with a double-digit lead. Whilst Fillon endorsed Macron only minutes after exit polls were released on Sunday, La Manif pour Tous and others seem not to be convinced.

Le Pen called Fillon’s endorsement of Macron a “betrayal” to his supporters earlier this week. “These are the people who defended their candidate in extremely difficult conditions and who were rewarded by listening to their candidate at 8:02 pm saying that we must vote for Mr. Macron,” she said.