The Labour Party has suspended one of its members over allegations of anti-Semitism, following the slew of abuse thrown at a BBC presenter after a car-crash interview with  Labour leader Jeremy Corbyn.

BBC Radio 4 Women’s Hour Presenter Emma Barnett was inundated with abuse on Twitter by Corbyn supporters on Tuesday, following an interview in which the Labour leader had to look up details of his party’s manifesto on his iPad.

Barnett was accused of being a “zionist shill” who “hates Corbyn” and therefore biased against the leader.

Allegations have surfaced that @Emmabarnett is a Zionist.

Are the allegations true Emma?

The account followed up the original tweet by claiming they had merely been “asking a question”. But a senior party member has told Politics Home that the party did not see it the same way.

“It was judged to be conduct prejudicial or grossly detrimental to the party,” the source said, adding: “Phillip Jones has been suspended from the Labour party, pending an investigation.”

The abuse we have received today for asking a simple question is amazing. https://t.co/O70N8c2ZMq

Appearing at the launch of Labour’s race and faith manifesto on Tuesday afternoon Corbyn denounced the abuse hurled at Barnett as “unacceptable”.

The Labour Party have also released a statement, saying: “The Labour party takes all allegations of abuse and anti-Semitic behaviour seriously. As Jeremy Corbyn made clear at the launch of Labour’s Race and Faith Manifesto, we will not tolerate it under any circumstances.”

But, coming in the same week as Labour Parliamentary candidate Naz Shah was shouted down with cries of “Jew!” for saying that Israel has a right to exist, the incident will reinforce the impression in many people’s minds that Labour has an anti-Semitism problem.

A poll conducted for the Jewish Chronical by Survation has found that support for the Labour Party among the Jewish community has plummeted, with just 13 per cent of Jews planning to vote for the party in next week’s election, against 77 per cent who will be casting a vote for the Conservative Party. 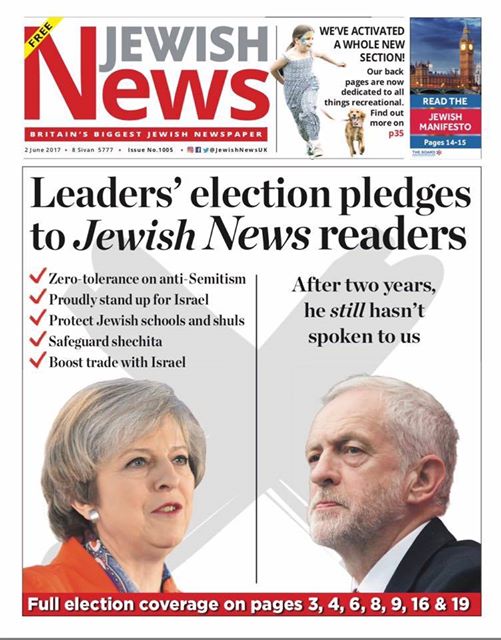 Meanwhile the Jewish News has come out in support of the Conservatives, writing of Jeremy Corbyn: “Rhetoric of zero tolerance has all too often not been matched by actions; a suggestion that our concerns have not been taken as seriously as they should. The cases Ken Livingstone and Oxford Union Labour Club. The speedy readmission of Jackie Walker, only for the party to have to suspend her again, stand out.

“[T]here is also no getting away from a 30-year one-sided record on Israel and the Palestinians. The very thought of someone who previously introduced members of Hamas as ‘friends’ and who attended an event where a wreath was laid at the grave of Munich Olympic terrorist becoming PM, is more than enough to send a shudder through many British Jews.”