The Franco-German power couple held an unusual joint press conference after meeting their 26 European Union counterparts, against a backdrop of their respective flags and the bloc’s blue banner with yellow stars.

“When France and Germany speak with one voice, Europe can move forward,” newcomer Macron told a room almost filled to bursting point with reporters as he stood alongside the German chancellor.

Despite her more pragmatic tone, the message from 62-year-old Merkel was the same.

“This press conference shows that we are resolved to jointly find solutions to problems,” she said.

The joint press conference came exactly a year after Britain’s shock referendum vote to become the first country to leave the European Union, which prompted dire predictions of the break-up of the bloc.

But Europe has jumped on the bandwagon of Macron’s stunning election victory over French far-right leader Marine Le Pen to trumpet a newfound optimism after years of austerity and crisis despite Brexit.

At the heart of that is the idea that Macron may be able to repair the traditional “engine” behind European integration — the post-war alliance of Paris and Berlin after centuries of conflict. 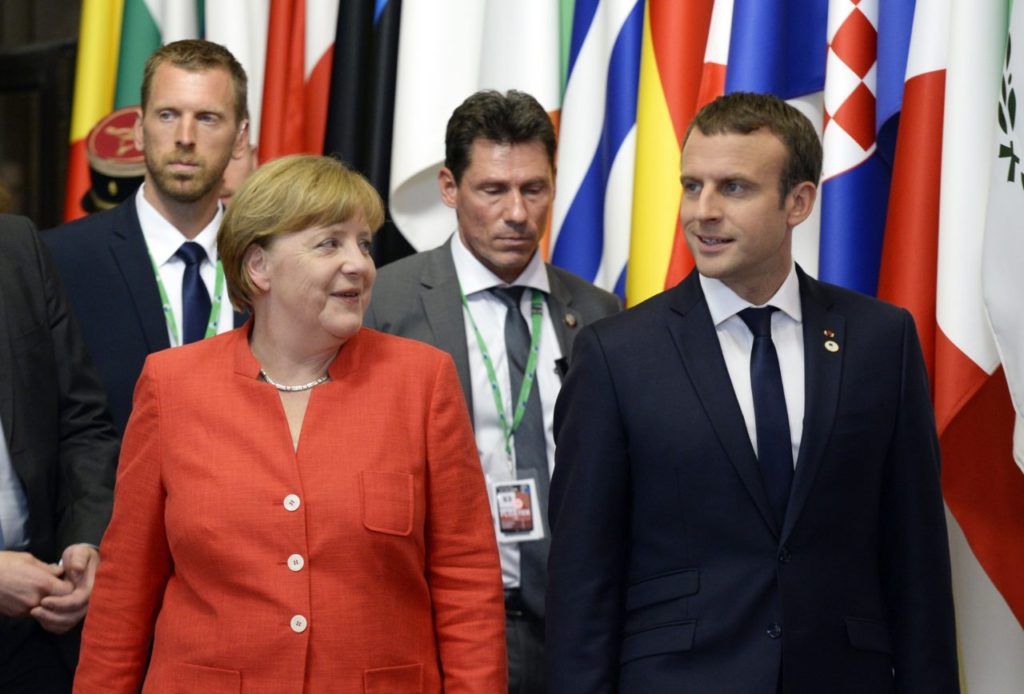 ‘More than a symbol’

The French and German leaders — variously dubbed Merkron, Mackerel and Emmangela in the style of celebrity couple nicknames — said they intended to use that engine to get moving.

Macron insisted that the decision of the two leaders to appear together was more than just a piece of political posturing.

“It is more than a symbol, it is a true work ethic,” he said.

Merkel and Macron insisted on their unity on a host of issues including plans to boost Europe’s defence capabilities, with the continent unable to rely on Britain or the United States under Donald Trump.

They also proclaimed their togetherness on climate change– especially after Trump pulled out of the Paris climate deal — counter-terrorism and trade issues.

However they were careful to avoid going into the details of delicate subjects like the reform of the eurozone, a pet project of Macron who wants it to have its own parliament and finance minister.

“We don’t announce in advance things that we can’t hold to,” said the ever-sensible chancellor, when asked if they would finally commit to concrete proposals after German elections in September.

The pair also both took a cautious stance on British Prime Minister Theresa May’s offer on the rights of EU citizens living in Britain after Brexit.

But in one area, Macron may have found that his summit honeymoon was over almost before it started.

“Fairer trade is preferable than the law of the jungle,” Macron told the press conference as he defended his plans.