A 27-year-old Gambian asylum seeker has been arrested after he attacked a passenger on a train in Germany with a knife and a glass bottle after the victim urged him to”calm down”.

The Gambian attacked the German man on Saturday evening shortly before 7 pm on an intercity train between Offenburg and Karlsruhe.

The attacker boarded at Offenburg without a ticket and after being confronted by personnel on the train and told to get off at the next stop, he became aggressive and started threatening and insulting other passengers, Pforzheimer Zeitung reports.

The train employee called the police and as the situation escalated the man brought out a glass bottle, which he broke, and a kitchen knife. The 38-year-old victim attempted to calm the irate asylum seeker and was attacked with both the broken glass bottle and the knife.

The victim was injured in multiple places on his body including his hands, thighs, and shoulders as he attempted to defend against the violent attack.

The Gambian was arrested by federal police at Karlsruhe’s main railway station without resistance after the train employee was able to talk to the man and calm him down after the attack.

Authorities are investigating the Gambian and looking at charges of grievous bodily harm, according to the Karlsruhe prosecutors office.

Attacks on trains in Germany are becoming more frequent and very often the perpetrators are asylum seekers. The most well-known case involved an Afghan asylum seeker who injured several passengers on a train in Wurzburg last year after attacking them with an axe. The 17-year-old was later shot and killed by police after fleeing the scene of the attack. 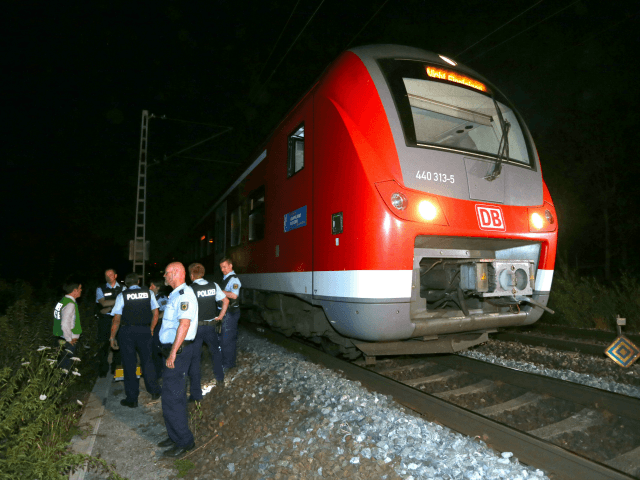 Earlier this year, a 36-year-old man from former Yugoslavia injured several people at the train station in Dusseldorf after he began attacking people with an axe onboard a train at the station.

In January of this year, another migrant, a 16-year-old paperless young man from Morocco, almost killed a woman by pushing her onto the train tracks at a subway station in Hamburg. The migrant had attempted to rob the woman before he was noticed by the victim who resisted and was pushed onto the train tracks causing head injuries.

A similar case occurred in March at the Dresden-Zschachwitz S-Bahn station in which two asylum seekers, from Libya and Morocco, knocked a man onto the railway tracks after he refused to give them a cigarette.

The two men then used their feet to prevent the man from getting back onto the platform as the train approached. Fortunately, the driver of the train was able to stop the train only a few yards from where the man was standing.