The University of Reims Champagne-Ardennes has suspended all courses due to security concerns after around 40 migrants began to squat on the campus only days after classes began.

President of the university Guillaume Gellé wrote a letter to the student population on Sunday saying: “Access to the university premises located on the Red Cross campus is forbidden until security conditions are restored.”

Gellé told local media that the security situation also extended to the migrants themselves as he noted there were children amongst them, L’Express reports.

The 40 migrants, some of which are families, came to the university campus in north-east France after being kicked out of the Saint John Perse park where they had formed a makeshift migrant camp less than a mile from the campus.

The French student union UNEF has demanded that the local government assign homes to the migrants. A press release on the union’s Facebook page reads: “We call on the local authorities, the town hall of Reims, the prefecture to urgently shelter these families.”

So far, authorities have not commented on the issue and classes remain closed “indefinitely” at the university. 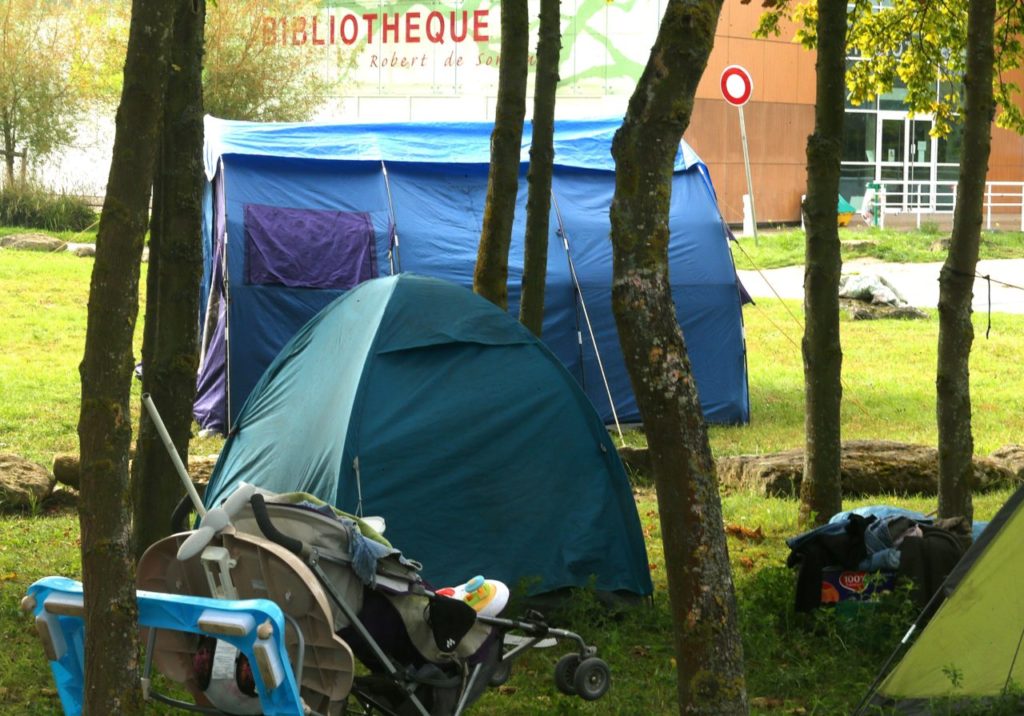 This photo taken on September 18, 2017, shows tent shelters installed by a group of migrants on the campus of the University of Reims in Reims, northeastern France. (Photo: FRANCOIS NASCIMBENI/AFP/Getty Images)

Makeshift migrant camps have been a problem in France since the formation of the infamous Calais Jungle camp. The Jungle was cleared last year, which led to many migrants heading to places like the French capital of Paris where makeshift camps were set up first near the Stalingrad metro station and then in the vicinity of the Porte De La Chapelle metro station.

Breitbart London spoke to migrants in Paris earlier this year who blamed the west for their situation. Many of the migrants claimed to have come from Africa, with some saying they had only been in France for several months.

Though the Jungle has officially been cleared, more and more migrants have been coming back to the port town of Calais in recent months in hopes of illegally entering the UK. The French Interior Ministry has estimated that there have been over 17,000 attempts to sneak across to Britain this year alone.

The numbers have increased so much that the government has been forced to provide sanitation facilities for the migrants and have repurposed an old monastery to house migrants, as well.