Taha Hussain, who vowed to tear down the British flag at Windsor Castle and replace it with the banner of Islamic State leader Abu Bakr al Baghdadi, has been jailed for four and a half years for making and sharing terrorist propaganda videos.

He, and another Islamist, filmed themselves making threats and yelling “Allahu Akbar” and other Islamic State slogans whilst driving past Windsor Castle and at the nearby Coldstream Guards barracks, reports Sky News.

The Islamist was a close friend of terrorist Khuram Shazad Butt, who, along with Youssef Zaghba and Rachid Redouane, killed seven and injured nearly 50 in vehicular ramming and stabbing attacks on London Bridge and Borough Market in June. All three were shot dead by police at the scene.

Security sources told the broadcaster that had Hussain not been arrested 10 months before, it is “perfectly conceivable he’d have gone on to play a part in that attack”.

“Fallujah was liberated, Windsor will be liberated. Maybe in 10 years maybe 30 years,” Hussain told the camera, then proceeded to scream “Allahu Akbar”, “shariah for UK”, and other Islamist slogans.

Driving past the barracks, he said: “British army, kuffar [unbeliever] army they will burn in hell.”

The fellow passenger then observed people walking around the streets on the Saturday night, with Hussain remarking: “They can enjoy it while they can.

“What they don’t realise is that while they are drinking, which is haram [forbidden], they will make their hole in hellfire bigger.” 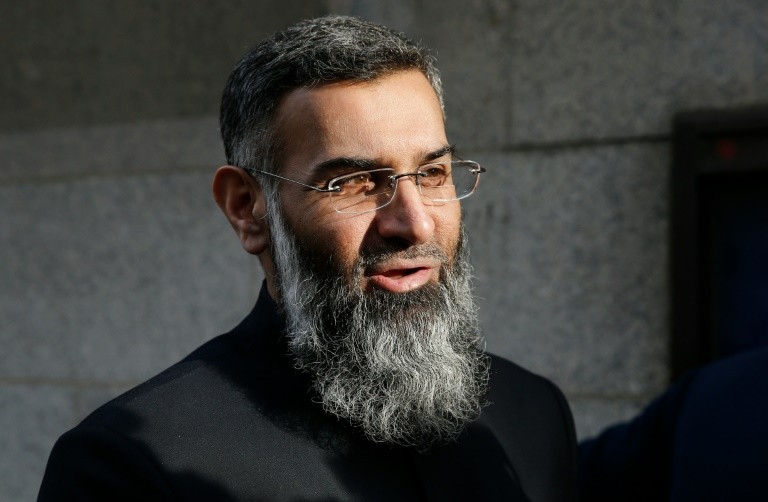 British muslim cleric Anjem Choudary used a series of talks posted on YouTube to invite backing for the group, and pledged their allegiance to IS leader Abu Bakr al-Baghdadi (Photo by AFP/File Adrian Dennis)

Finally, driving past the eleventh-century residency of the Royal Family, Hussain is heard saying: “See that place over there? [Windsor Castle] Insha’Allah, we’re going to [tear] up the British flag [replace it] with that of shariah Insha’Allah, of the Emir al Mumineen [Leader of the Faithful] Abu Bakr al Baghdadi.”

He made a second video outside Hounslow Barracks with 17-year-old Haroon Ali Syed who was jailed for life in July 2017 for plotting a terrorist attack at an Elton John concert in Hyde Park to coincide with the 15th anniversary of the September 11th attacks.

The 21-year-old was part also of Islamist preacher Anjem Choudary’s circle and was regularly pictured with other members of the group at rallies and protests. Choudary was convicted in 2016 for  supporting Islamic State and jailed for five and a half years.

Hussain was arrested by police in August 2016 after the disturbing content was found on his phone. The court heard that the device had the black flag of Islamic State as the screen saver and the pin set to 9117 – in apparent homage to the 9/11 and 7/7 terror attacks.